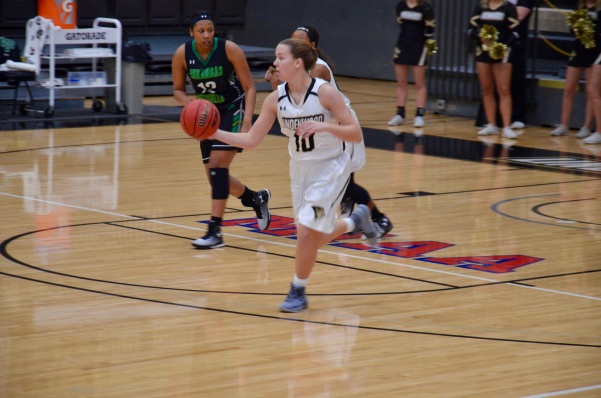 Kenzie Guese dribbles the ball down the court in a game vs the University of Arkansas-Monticello on Nov. 11.
Photo by Rolando Dupuy.

The Lindenwood women’s basketball team continued its winning ways on Tuesday night with a 99-33 win against Fontbonne University.

Lindenwood started the game on an 18-0 run and never took its foot off the gas pedal.

The second quarter was much like the first as the Lions outscored the Griffins 20-10 to take a 46-14 lead into halftime.

One of the storylines of the game was the Lindenwood defense, which was in lockdown mode. It held Fontbonne to just 23 percent shooting from the field (5-22), while forcing the team to commit 15 turnovers.

In the first half, Lindenwood shot 42 percent from the floor and was led by Kallie Bildner who had 10 points.

After the break, the Lions started the third quarter with an 11-0 run.

Another storyline for the Lions along with its defense is the balanced scoring the team is getting. Lindenwood had four players in double figures, led by Gabby Walker who had 24 and Kallie Bildner who chipped in 20.

Bildner also picked up her third double-double in as many games as she also snatched up 13 rebounds.

With the win, the Lions improve to 3-0 on the season. They will face their first road test of the season as they take on the University of Illinois-Springfield at 1 p.m. on Nov. 18 in Springfield, Illinois.