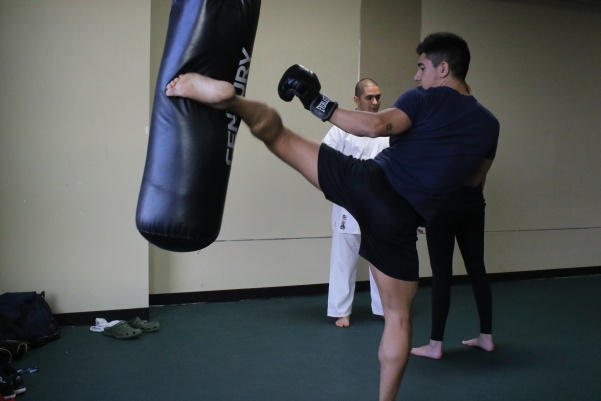 In their first semester at Lindenwood, President Malachi Cecil and two friends decided to rally for an expansion of the sport they love, and now the martial arts club is a reality at Lindenwood.

“Me and Hikaru and Tony were already training a lot because we did Muay Thai before we came here,” Cecil said. “We thought if we made a club out of it then it could be official, and we could get the word out better.”

Rolling and sparring aren’t the only goals; teaching new people several areas of martial arts are also a strong focus.

“I help new people who want to learn from the very beginning how to do Muay Thai,” said Tony Andrades, another founding member. “I have also worked as a kickboxing coach, so I am going to structure the training sessions.”

The club has already seen quick popularity among students, Cecil said, with more than 20 students signing up.

The club has even caught the interest of people involved in other sports, such as Kayla Hamilton of the water polo team.

“I really had to join because I like … learning the other styles,” Hamilton said. “It’s also fun to dance around with each other. With martial arts, you never know what’s going to happen.”

Hamilton’s particular appreciation was the adjustment each person makes for other members.

“My version of full contact is way different than theirs, but they’re totally open to it,” Hamilton said.

Club members know that a martial arts club with full contact sparring does come with risks, so precautions are taken ahead of time.

“Everybody who comes has to practice awhile before sparring, unless they have background, so that nobody gets hurt,” Cecil said.

The club is focused on recruitment and developing structure on the fly, but they do have high hopes for the near future.

“At the moment we don’t have anything big planned,” Cecil said. “First we’ve got to find other clubs and teams… We think it would be cool to bring in one of the martial arts clubs from another school in and have fights.”

All founding members take pride in the open arm approach to the club and assure all prospective members that’s how it will stay.

“We have people that haven’t practiced any martial arts before, and it makes the practices more fun since all of us are trying to help new and inexperienced members,” Andrades said.

The club meets every Monday, Wednesday and Friday afternoon on the Hyland Arena track from 3-4:30 p.m.