Review: Fall Out Boy sticks to new sound for ‘HOLD ME TIGHT OR DON’T’ 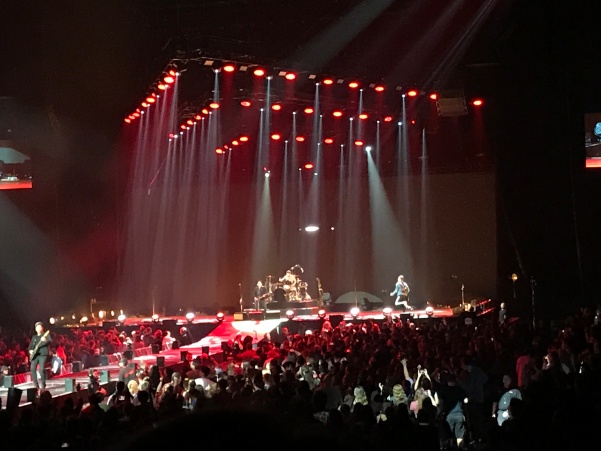 Fall Out Boy at the Scottrade Center on its St. Louis stop of the M A N I A tour on Oct 21.
Photo by Megan Courtney

The electronic theme that Fall Out Boy has stuck to for the songs released off of M A N I A so far is evident on its newest single.

Patrick Stump’s vocal range is once again demonstrated throughout the song as he goes from high to low notes; it’s voice that is almost instantly recognizable anywhere.

The song itself starts out with a human whistling followed by an electronic beat. It’s a tempo that is the perfect rhythm to dance to.

On the band’s YouTube channel, the song got mixed reactions.

Other people said that they “loved it” and it was the “best song off of M A N I A so far.”

“I think this whole album is about exploring new sounds.” said Samantha Kimball. “This song definitely lives up to what the band has delivered with M A N I A so far.”

While the songs off of M A N I A have a more modern feel than past albums like “Infinity on High” and “Folie à Deux,” there are definitely elements of the “old” Fall Out Boy mixed in, like the heavy drum tracking and Stump’s distinctive voice.

The band posted a link to the music video on Twitter captioned “it’s time to wake up the dead and dance,” which got mixed reviews as well.

The video gave viewers a glimpse into what the culture is like in Mexico, and many users responded positively.

“I’m from Mexico and I love the song and the video so much. It makes me want to cry,” one user wrote.

Check out the video for “HOLD ME TIGHT OR DON’T” below.