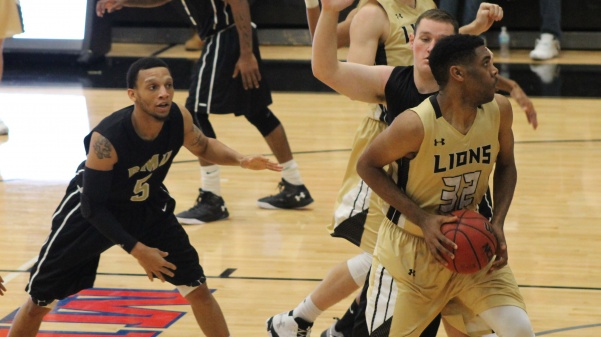 Dominique Dobbs, No. 32, attempts to make a basket on Robert Morris University in Hyland Arena on Dec. 5, 2016.
Photo by Kelly Logan

The men’s basketball team fell on the road to Truman State by a score of 79-67 despite a career-high 23 points from guard Brad Newman.

The Lions got off to an early 17-9 lead with 10:19 to play in the first half at Pershing Arena in Kirksville.

Velky was the leading scorer in the game and finish with 25 points.

At the half Truman State led 28-24 and shot 39 percent compared to Lindenwood’s 24 percent.

Junior Brad Newman had 9 points in the first as the Lions leading scorer.

In the second half, Truman State guard Jack Green got hot for the Bulldogs. He made back-to-back three-pointers to start the half. Green ended up finishing second on the team in points with 22 points, with 19 of those points coming in the second half.

Lindenwood stormed back to make the score 64-60 with 4:10 to play. The points were spread across the roster in the Lions’ 18-7 run.

That’s the closest the score would get for the Lions as the Bulldogs finished the game on a 15-7 run to win the contest.

“We dug ourselves too big of a hole,” head coach Lance Randall said. “We fought back in the second half, we moved the ball better and we unfortunately just had a bunch of shots that went in and out.”

Lindenwood will  travel to Melbourne, Florida, to take on Florida Tech on at 1 p.m. on Saturday.