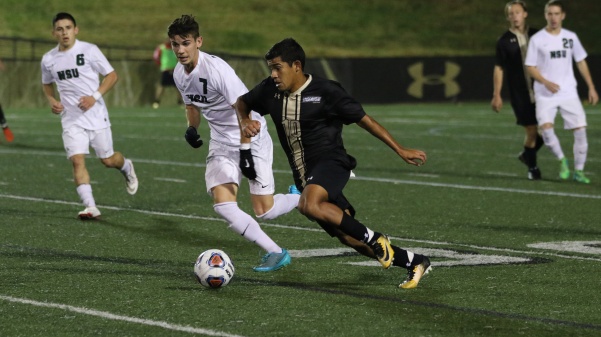 Gabriel Jaimes, No. 10, dribbles up the field during the Lions' 1-0 win against Northeastern State University on Sunday, Nov. 5, at Harlen C. Hunter Stadium.
Photo by Kyle Rhine

The Lindenwood men’s soccer team had an up-and-down year but finished the season with a 10-7 record and posted a 5-3 record in the MIAA conference.

Jaimes appeared in 17 games for the Lions and recorded four goals and four assists. Jaimes was second on the team with 12 points and was named to the All-MIAA first team earlier this month.

Ganz was awarded MIAA Freshman of the Year and was also named to the All-MIAA first team. Ganz led the Lions with 11 goals and 25 points in the 16 games played.

“You always need to look for improvements in every field of life,” Ganz said. “Believe in yourself and do not listen to people.”

Tutas started all 17 games and was named to the All-MIAA first team. In his four-year career, Tutas appeared in 71 games and started 68 games for the Lions. He finished his collegiate career with one goal and two assists.

Licht finished the season with a record of 9-3 in net and led the MIAA in save percentage (.813) and goals-against average (0.73). While playing in 14 games, Licht had five shutouts with four coming in Lindenwood’s last five games.

Earlier this month, Ryan Butchart and Gaspar Alvarez were selected to the College Sports Information Directors of America academic all-district first team according to Lindenwood Athletics.

Senior Ryan Butchart recorded two assists on the season and started 11 games for the Lions, while appearing in 15 games.