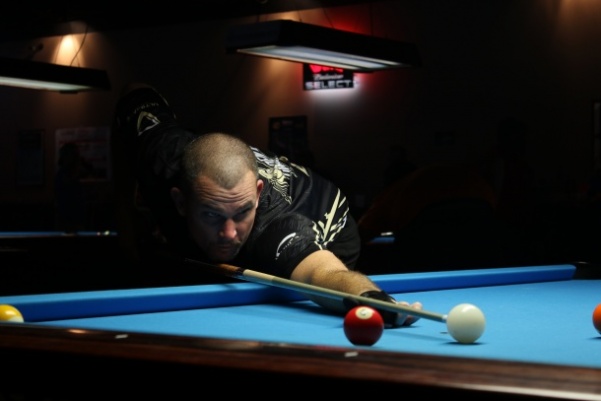 Brandon Jordan looking to salvage the night during the first match of his second set. The Lions fell to Teacher's Billiards 15-12.
Photo by Walker Van Wey

The Lindenwood billiards team ran full steam into the smoky wall known as Teacher’s Billiards as the Lions ended the semester with a 15-12 loss on Thursday, Nov. 16.

Four days after their most coveted victory of the season, the Lions were slated for a rematch against Teacher’s on enemy grounds, and despite jumping out to an early lead, the opposition proved to be too much.

“The match began with an early 2-0 lead, then we fell behind 3-8,” head coach Mark Wilson said. “We made a little rally, but Teacher’s was just too much for us on their home turf.”

Midway through the race to 27 match, the score was announced with Teachers ahead 13-7, to which freshman Andreas Madsen frustratingly saw the window closing.

“If we can win this, it will be the comeback of the century,” Madsen said.

Moments later, the win was secured for Teacher’s.

Although the smoke-filled bar wasn’t the ideal environment, the Lions made it very clear the atmosphere wasn’t the major factor to the loss.

“Getting used to the smoke was tough; it’s dark and dingy in there and things like that,” said senior Landon Shuffett. “In the end though, I really do just think we got outplayed.”

None too pleased with the outcome, Wilson insisted that opportunities were available, but the team refused to capitalize.

“We have players that failed to display the killer instinct required to be effective against genuine competition, too willing to accept missing routine type shots,” Wilson said. “This stems from sloppy and lazy practice habits with my lack of discipline and insistence upon stronger work ethic.”

The Lions closed out the semester with a 10-2 record; however, Wilson feels that the high winning percentage undermined the lack of determination when facing one of the few threatening opponents.

“Our nice record on the year now reflects that we’re lamb killers and not ready for genuine, fierce competition,” Wilson said. “This circumstance is completely my fault for not insisting that the players who compete are more prepared, focused and intense.”

Echoing the dissatisfaction for the loss was junior Taren Stewart, adding that ending the semester with a loss will add motivation for the break.

“We’re going into winter break with a loss and feeling what defeat feels like and not liking it,” Stewart said. “I think this forces us to work harder in practice. Next semester we’re going to come out even better.”

With the return of standout sophomore Brandon Vanoverbeke, who made his return from academic ineligibility, and another list of people gunning to take down the Lindenwood Lions, coach Wilson assures that the best is yet to come.