Lions hockey swept on the road by Ohio Bobcats 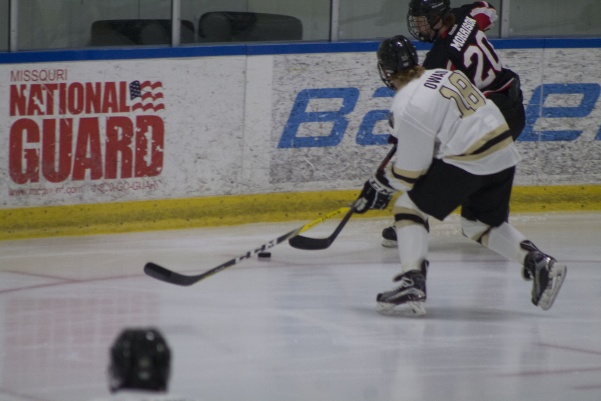 Junior forward Cade Owad attempts to take the puck from an opponent in an October 2016 game against Minot State.
File photo from Kelby Lorenz

Lions hockey fell twice this weekend to the Ohio University Bobcats at the Bird Arena in Athens, Ohio.

Friday’s game remained scoreless for both teams until 0.3 seconds left in the third period, according to Lindenwood Student Life Sports when the Bobcats sneaked the puck past Lindenwood goalie Michael Hails, resulting in a 1-0 loss for Lindenwood on Nov. 17.

Despite the loss, Lindenwood had 28 shots on goal compared to Ohio’s 20, and Hails stopped 19 of those shots on goal.

Saturday’s game saw more scoring, but only a single goal from the Lions.

The Bobcats scored twice in the first period and Lindenwood left those goals unanswered.

The lone Lindenwood goal came from sophomore forward Ryan Carson, with an assist from Cade Owad according to the ACHA official website.

The Bobcats scored twice more in the second period and left the third period scoreless for a 4-1 Lindenwood loss.

Hails stopped 29 of 33 shots from Ohio, and Lindenwood had an almost even 32 shots on goal themselves. Lindenwood will face off against the Bobcats again at the Wentzville Ice Arena on Jan. 6 and 7 for their first games of 2018.

League play will cease for the Thanksgiving weekend for the Lions, who will return to the road for their final games of the year to rematch the University of Illinois. They will play Dec. 1 and 2 at the Illinois Ice Arena in Urbana-Champaign, Il and the puck will drop at 7:30 p.m. on both nights. Both games will be available for streaming on YouTube.