The emerging field of game design 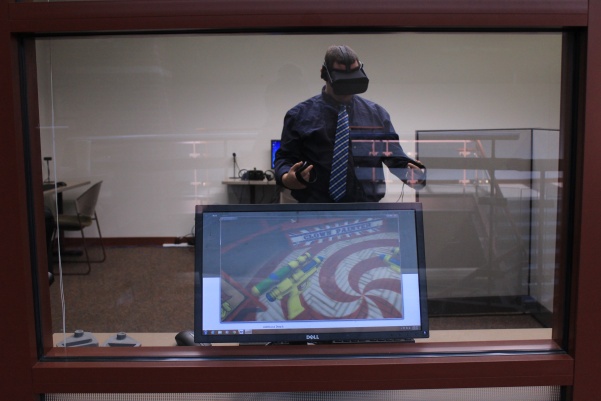 Adjunct instructor Chris Pusczak demonstrates how to play a game with a virtual-reality headset. These headsets will be used in classes for the game design major.
Photo by Lindsey Fiala

This year Lindenwood has joined a growing number of universities across the nation that have introduced new degree programs built around designing video games.

The video game industry could be worth $35 billion by 2021, according to a September BBC Future article. That means more people will be needed to design games.

In 2006, the Federation of American Scientists attributed modern video game success to the “rich landscape of adventure” and the challenge that can be found in many games.

“Today, people of all walks of life and all ages enjoy playing games,” Ratican said. “The biggest difference between video games and demographic is that people who play video games don’t stop.”

Ratican said students will focus on game art, game design and quality assurance. In these classes, students will have an opportunity to work in classrooms outfitted for game design with new equipment like virtual-reality headsets.

Game design students will create full 2D and 3D games. They also will work on level and character design using various game programs like GameMaker, which is used to make 2D games.

“In these classes, we learn how to code video games, about the industry, how to market video games, how to build stories for them, the different programs you use and how to build characters,” said Brooke Phillips, an advertising and public relations student who is currently enrolled in the video game design minor.

Digital Librarian Michael Fetters said students also will learn about non-digital games like board games and card games. Fetters, who is in charge of the gaming center in the Library Academic Resource Center, said gaming has benefits.

Although the different types of games that people play might change, some teachers said the influences that video games can have on an audience do not.

“I don’t think that the content in games really matters at all; I think it has more to do with the medium itself and how we play games,” said Andrew Smith, assistant communications professor.

Smith said he considers movies and TV to be more immersive media than video games but recognizes some of the reasons people play them.

“I’ve known people that will sacrifice everything because this [game] came out,” Smith said. “I think a lot of people will turn to games because they’re not satisfied in their real life, and it’s very easy to be high-ranking in a game. I think it’s an escape.”

“If you’re not where you want to be romantically, physically or financially, there’s a game that will replace and simulate that,” he said.
Smith said games are evolving quickly.

“In the past 30 years, we’ve gone from Atari to some of the most realistic depictions of sex and violence I’ve ever seen simulated,” Smith said. “I think as a population, it scares us. It happens so fast. How did we get from Mario to where we are now, where you can tell any story?”