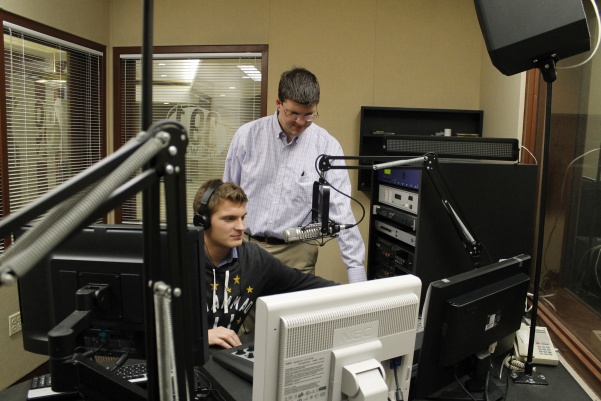 Student Dillon Archer (left) and Chad Briesacher on air in the KCLC radio station in the Spellmann Center on Sept. 27. In his new position, Briesacher will devote his full attention to KCLC.
Photo by Lindsey Fiala

A longtime Lion has returned to Lindenwood as the new program director for the campus radio station.

Lindenwood alumnus Chad Briesacher has replaced his mentor Richard Reighard, who was the KCLC program director for 30 years.

Briesacher graduated from Lindenwood in 2008 and got his master’s here in 2011. He also served as Reighard’s graduate assistant and worked as an adjunct professor.

Since then, Briesacher has worked at other radio stations in various positions, most recently as general manager for Southern Illinois Radio Group, a company with licensed radio stations including WHCO AM in Sparta, Illinois, and WINI AM in Murphysboro, Illinois.

While Briesacher was transitioning into his new role at KCLC, he had already begun re-imaging the adult album alternative FM station “The Wood.”

However, he said he does not plan to make drastic changes to the format of “The Wood” or the other Lindenwood stations, “The Experience” HD and KCLC AM.

[perfectpullquote align=”right” cite=”Richard Reighard” link=”” color=”” class=”” size=””]At some commercial radio stations, those jobs are handled by five or six people, but here, all the work falls on the program director when there are no students to fulfill the duties[/perfectpullquote]

“The [adult album alternative] format’s good,” Briesacher said. “It’s edgy, because it’s all about new artist discovery, and that’s what I love. I’m not a huge concertgoer personally … but I love going to little venues like the Pageant or Blueberry Hill and seeing the types of bands that we play.”

Having been mentored by Reighard, Briesacher said he is nervous about taking over as director but hopes he can carry the mantle forward.

“When I was a student, Rich [Reighard] just had this never-ending fountain of knowledge from a whole career in radio, and, you know, it’s kind of intimidating going in and taking over,” he said.

Both Reighard and program manager Mike Wall, who was in charge of hiring the new station director, agreed that Briesacher was the right man for the job.

They said Briesacher’s experience played a large part in their consensus.

“He has been in the trenches doing just about everything: being a general manager, sales manager, news director, doing sports, doing everything,” Reighard said.

The role of program director involves a lot of diverse responsibilities, especially at small stations like KCLC where positions are less compartmentalized.

“At some commercial radio stations, those jobs are handled by five or six people, but here, all the work falls on the program director when there are no students to fulfill the duties,” Reighard said.

What separated Briesacher from the other highly qualified candidates was his history at KCLC. He learned the inside secrets of the station as Reighard’s graduate assistant.

[perfectpullquote align=”left” cite=”Richard Reighard” link=”” color=”” class=”” size=””]It’s what he always wanted to do, and, you know, that’s the perfect kind of person for this position[/perfectpullquote]

“It was a no-brainer,” Reighard said. “He already knows most of what I had to do every day. He had forgotten some of it when he came back, but taking a refresher is a lot easier that having to learn something brand new.”

The final reason for Briesacher’s selection was his positive attitude and passion for the job, said Reighard, who described Briesacher as an “enthusiastic radio rat.”

“He loves radio,” Reighard said. “It’s what he always wanted to do, and, you know, that’s the perfect kind of person for this position. Someone who just lives to come into work every day and get his hands dirty with the nuts and bolts of broadcasting.”

Reighard said he wanted Briesacher to take over KCLC because Reighard wants to focus on his health and role as the department chair for mass communications.

“Three heart attacks and a number of other numerous things, and I just don’t have the energy level that [Briesacher] does,” Reighard said.

Reighard left behind a long-standing legacy.

“Rich Reighard had, over three decades, provided continuity for the broadcasting program,” Wall said. “I’m convinced that if Rich had not been there at a few occasions that the program would’ve probably fallen apart.”

Briesacher said he worries about whether he can live up to Reighard’s legacy and will miss selling advertisements, though he is excited to work with young broadcasters and watch them develop.