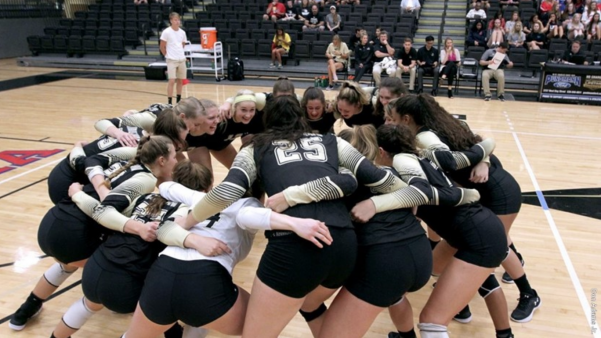 In a file photo from 2017, Lindenwood women's volleyball prepares for a home game at Hyland Arena.
Photo by Don Adams Jr.

Lindenwood women’s volleyball (20-13 overall, 11-8 MIAA) set a host of records in their first year under head coach Will Condon.

The Lions won 20 games this season, besting their previous record of 15, set in 2012. Having the winningest season in Lindenwood NCAA history was just the tip of the iceberg for the Lions.

Off the back of their successes in the win column, the Lions achieved their first-ever appearance in the MIAA conference tournament. The Lions qualified as the sixth seed before falling to third seed Central Oklahoma in the opening round of the tournament.

Senior transfer Emily Wylie put in stellar performances for the Lions all season long. The 6-foot-4-inch right side hitter had 336 kills on the season. Wylie broke Kayla Guyot’s Lindenwood NCAA kill record of 318. Wylie was named to the All-MIAA first team.

Wylie transferred to Lindenwood after her school, Armstrong State, merged with Georgia Southern.

Alex Dahlstrom’s serving prowess was on show this season, as she had a team-high 41 service aces. Dahlstrom was second on the team with 237 kills, enough to earn her an All-MIAA honorable mention selection.

Serving was an important part of the game plan for the Lions this season. “When we played well, we served pretty tough,” said Condon. “We were versatile enough to score points a few different ways.”

Livewire defensive specialist Megan Hellwege was everywhere for the Lions. The senior recorded 685 digs, that figure placed her at the top of the MIAA and fifth nationally in Division 2. Hellwege was honored for her sublime season with an All-MIAA first team selection.

Hellwege was also confident that this season had set a precedent for the Lions moving forward.

[perfectpullquote align=”full” cite=”” link=”” color=”” class=”” size=””]”We wanted to set a higher standard for the program as a whole moving forward,” said Hellwege. “I think that was the motivation throughout the entire 2017 season. To leave with 20 wins, it was something that we did take pride in. Making the conference tournament for the first time was obviously a huge goal we wanted to achieve. But I want that to be the expectation moving forward so that future Lindenwood teams can aim to win it.”[/perfectpullquote]

Senior Ivy Reynolds proved to be a jack of all trades for the Lions as she also found herself on the All-MIAA honorable mention list. Reynolds had a team-high 646 assists, 29 service aces and 145 kills.

Setter Ally Clancy broke the 2000 assist mark on the season.

The season wasn’t without hiccups for the Lions. They lost middle hitter Alex Bogusz for just over a month in the middle of the season to an ankle injury. Bogusz was the Lions most effective hitter in 2016.

Bogusz’s absence paved the way for freshman Sadie Kosciuk to step up. Kosciuk proved to be a crucial part of the Lions offense as she walloped her way to 162 kills. Most impressive about Kosciuk’s hitting was the efficiency she displayed. Kosciuk was fifth in the MIAA and led the Lions with a .311 hitting percentage.

Despite only starting 17 games out of a possible 33, Kosciuk was named to the All-MIAA second team. Kosciuk’s accolade was a true testament to her impact during the season.

The Lions will lose five seniors this year as Alex Dahlstrom, Emily Wylie, Megan Hellwege, Ivy Reynolds and Jess Krygsheld will all graduate. 2018 will give Condon his first chance to bring in his first recruiting class as he looks to build off the back of 2017’s successes.