Senior flies in for class, keeps dream job in Nashville 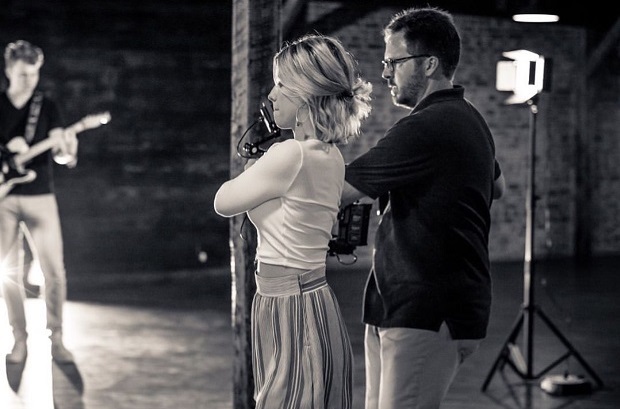 Lexy Kadey, with Andrew Kleewein to the right, shooting the music video for Cherry Avenue.
Photo used with permission from Lexy Kadey.

Imagine going to the airport, hopping on a plane, then heading straight to campus for class. Now imagine doing that every time you have class. That’s what senior Lexy Kadey has to do.

Kadey established a career producing music videos and filming weddings in Nashville, so with one class left to graduate in December she decided to fly in for 15 weeks.

“I have students who are over there in the dormitories and are too tired to get up, and they get in their car and drive over here, and then they’re late on top of that,” he said. “And here this woman getting on an airplane flying to class.”

Kadey has flown in more than 20 times for class this semester because she did not want to quit her job shooting weddings and producing music videos.

Kadey said her unusual solution has come with some challenges. For instance, she almost lost her scholarships for flying in; she said she had to meet with President Michael Shonrock and explain her situation because she was not supposed to be a commuter.

“You know that’s why you come [to Lindenwood], to get a job,” Kadey said. “I didn’t want to get replaced. There’s so many people in film in Nashville.”

Kadey met Lindenwood alumnus Andrew Kleewein, her future boss in Nashville, the final week of school last year. She was looking for a summer job in Nashville because her boyfriend, Austin Burke, is a country singer based in the city.

Kleewein was being interviewed at LUTV and mentioned during it that his company Tower Studios, which films weddings, would be expanding to Nashville during the summer and needed help.

She introduced herself immediately after the interview.

“Basically I told him to hire me,” Kadey said.

During college Kadey had no internships, but she made a documentary called “Crowning Change,” about the first gay pageant contestant to win a title. Kleewein said he decided to hire her because she is a go-getter and can solve problems.

“She had a kickstarter campaign for her documentary, so she showed a lot of initiative,” he said. “And at the same time she had a very outgoing personality, which is exactly what we were looking for.”

Carlos said she flew in an extra four nights for a one-credit workshop and has been very eager to put in the extra hours to set herself apart as a producer.

“She wants to learn it all, and that’s good,” he said. “As a producer you need to know every aspect of filmmaking.”

Soon after Kadey started working with Tower Studios, she pitched an idea to Kleewein to start producing music videos. Kadey said she had made a lot of connections living in Nashville and had been introduced to singers through her boyfriend.

“I know filming weddings; as a videographer, that’s a great way to start making money,” she said. “But when you’re an artist, you want to do films and music videos.”

So Kadey and Kleewein teamed up and created Copper Saw Films, a new brand to start making music videos. So far the company has produced videos for Cherry Avenue, Austin Burke and Jess Taylor.

“I love music videos because it’s so personalized … it’s a collaborative process but on a lower scale,” Kadey said.

Kleewein said he loved her vision because it is an opportunity for growth in technical and creative skills for his company.

“With wedding videos they’re great and a lot of fun, but we’re kind of limited because we have to capture things as they unfold,” he said. “With music videos, they give us the option to sculpt things ourselves.”

Approximately 100 people a day move into Nashville, and Kadey estimated that at least 50 percent of those people are in the music industry. She said that she sees the statistic as a way to network instead of being intimidated.

So far Kadey has started with indie artists, but one day dreams of being “the girl version of Joseph Kahn,” who recently produced Taylor Swift’s “Look What You Made Me Do.”

Kadey said she feels “like a fairy godmother” when she produces music videos for emerging artists because these musicians have dreamed about this moment their entire lives.

“When they see the playback footage and it’s better than what they’ve been fantasizing about for the past eight years, that’s basically the coolest thing ever,” she said.

Initially Kadey wanted to act and moved to L.A. when she was 19 years old, but she said the only roles she was casted for were “hot pool girls” or “pretty blonde”, which did not have many lines. So now her endgame is to be a filmmaker.

While in L.A., Kadey took one of James Franco’s acting classes, and a piece of his advice still sticks with her today.

“[He] said ‘If you can’t find the roles you are looking for, create them,’” she said.

Kadey decided to enroll at Lindenwood in cinema arts studies after her experience in L.A.

“The more I started learning about film and the gender inequality in female roles, I just felt like this is what I am supposed to do: Be in film and create films that empower women,” she said.

As a producer, Kadey said she already has encountered some sexism, but she said that helps weed out the people she does not want to work with.

“Some people are totally cool, and then some people, it’s kind of sad, they’re not used to a woman telling them what to do or how to be because they’re the guy,” she said.

Recently Kadey and Burke went to the Country Music Awards. She recognized it as an event to network.

“No one expects it; everyone expects me to be a country singer,” she said. “But no, actually I do videos.”

Carlos said Kadey can back up her passion with good skills and ideas.

And this semester has prepared her for a lifetime of flying.