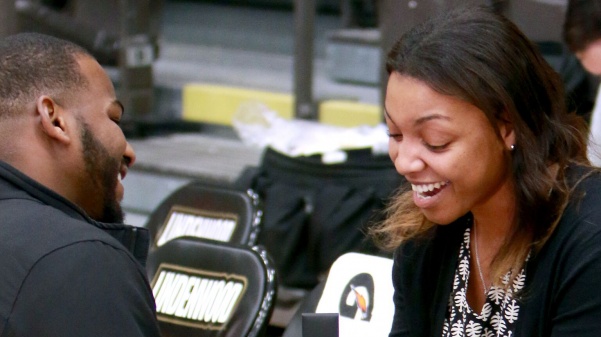 Assistant women’s basketball coach Bre Zanders and her boyfriend, Tron Watts, have a running competition as who is the best at surprises. After Watts’ marriage proposal in front of a Hyland Arena crowd, he is in the lead.

Before Lindenwood’s game against St. Louis College of Pharmacy the Hyland arena PA announcer directed the crowd’s attention to the video screen that played a slideshow of Zanders and Watts put together by Watts weeks in advance.

With the theme of love and the multiple hearts scattered throughout the slideshow, it didn’t take long for Zanders to figure out what was about to happen.

“At first I didn’t know what it was,” Zanders said. “Halfway through I was like, ‘There’s no way he’s doing this for sh*** and giggles.’”

As the slideshow ended, Watts walked across the gym, ring in hand, dropped down on one knee and asked Zanders to marry him. Zanders answered in a way that only she could.

“He asked me to marry him right away,” Zanders said. “I remember I said, ‘I’m going to throw up’ like four times.”

As she said yes, the two hugged and Watts put the ring on her finger, as difficult as it was at the time.

The moment sank in even more for Watts when he fully grasped that the months of planning this proposal had officially paid off.

“I had been planning it for like three months,” Watts said. “I spread the word to everyone what I was going to do. I told everybody. Everyone in the entire school knew but her. I was shocked that everybody held it in.”

Not only did Watts tell his friends, he had contacted Mike Morgan of Sports Information, head coach Tony Francis, Lindenwood photographer Don Adams Jr. and many more.

“The whole thing was definitely a moment to remember,” Zanders said. “All the things you hear in cheesy movie and romcoms and everything, it was all of that. I was Cinderella for a day.”

Although the Lions won by a score of 82-41, Zanders and Watts stole the show with seemingly everyone in the crowd congratulating them.

“The whole game, my phone was blowing up,” Zanders said. “I had to shut it off at midnight because of all the notifications.”

Watts’ phone has continued going off a day later and with each congratulation he receives, he is reminded that he put himself far ahead of Zanders in their competition of surprises.

“Texts are still rolling over into today,” Watts said. “I’m glad it went the way I wanted it. Now she knows I’m the G.O.A.T. with surprises.”

A year and a half of dating, three months of planning the engagement, multiple phone calls and one question proved that not only did it go the way Watts wanted, it was exactly what Zanders wanted as well.

“It was literally every girl’s dream come true,” Zanders said. “Any girl who says they don’t want something like that is lying. I’m going to remember that forever.”