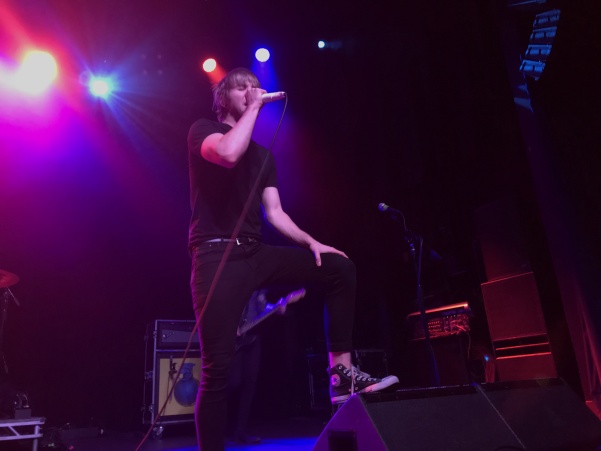 Patty Walters, vocalist of AS IT IS, on stage performing at Delmar Hall in St. Louis on Nov 21. AS IT IS is currently touring with Waterparks on its first-ever headlining tour, "Made In America," presented by Monster Energy.
Photo by Megan Courtney

An album that is stuffed with emotion from beginning to end, “okay.” is sure to leave listeners wallowing in their feelings.

“okay.” is the second full-length studio album by pop punk band AS IT IS, released earlier this year on Fearless Records.

Songs on the record, like track one, which is called “Pretty Little Distance,” are about coping with life and distancing oneself from reality when it becomes hard.

Other songs, like “Patchwork Love,” can hit a little closer to home for people who have just gotten out of a broken, loveless relationship that’s lost its spark, but want happiness for the other.

In an interview with Rock Sound magazine, vocalist Patty Walters said, “This song is about being with someone who no longer loves you. It was written to be a painful, bittersweet moment for two people who ultimately want the other to be happy.”

“okay.” is a song that explores mental illness and how that can affect an artist.

In the Rock Sound interview, Walters said, “Whilst writing this album, I had nowhere left to run, I sobbed, and I finally had no choice but to open up. I told all the important people in my life about how badly I’d been coping for the last year or more. I also felt it was time I paid a visit to a therapist. I wanted this song to be unashamedly personal.”

Siker Ryan, a newfound fan of AS IT IS, said that she likes the album “okay.”

“It’s one of the best albums out there,” Ryan said.

While the album is sure to bring back a wide variety of memories, it is one that is relatable and explores subjects that can sometimes be too complicated or painful to talk about. People can take comfort in knowing that they are not alone when they listen to it.

AS IT IS is currently the opener for the band Waterparks on its first-ever headlining tour, “Made In America,” presented by Monster Energy.