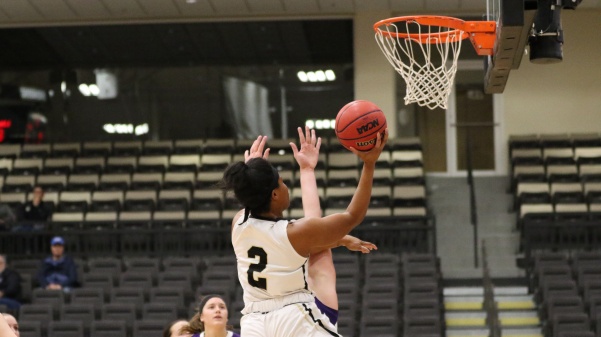 Charisse Williams, No. 2, drives into the paint for the layup in 77-68 victory over McKendree University on Tuesday, Nov. 28.
Photo by Walker Van Wey

Kallie Bildner will be looking to keep her double-double streak alive as the Lions (6-0) face Central Christian College (1-7) on Friday at 6 p.m. in Hyland Arena.

Lindenwood is coming off a dominant 77-58 victory over McKendree University on Nov. 28, while Central Christian College lost 76-48 to Missouri Valley College on Nov. 27.

The Lions’ defense is one reason for its early success this season. Lindenwood has held opposing teams to a .319 field goal percentage and is averaging 13.2 steals per game according to Lindenwood Athletics.

Despite being out-rebounded for the first time all season in Tuesday’s win over McKendree, Lindenwood has dominated the glass. The Lions have out-rebounded their opponents 285-190 to begin the season.

Sophomore forwards Bildner and Gabby Walker have taken a step up and have led the Lions through the first six games of the season.

Bildner has recorded a double-double in all six games and is averaging 21.3 points per game and averaging 13.8 rebounds per game.

Walker has scored double-digit points in her last four games and is second on the team with 15.6 points per game. The forward is shooting an impressive 61 percent from the field.

The Lions will face a two game MIAA roud trip games after the bout with Central Christian, beginning with a game against Pittsburg State on Thursday, Dec. 7, in Pittsburg, Kansas.