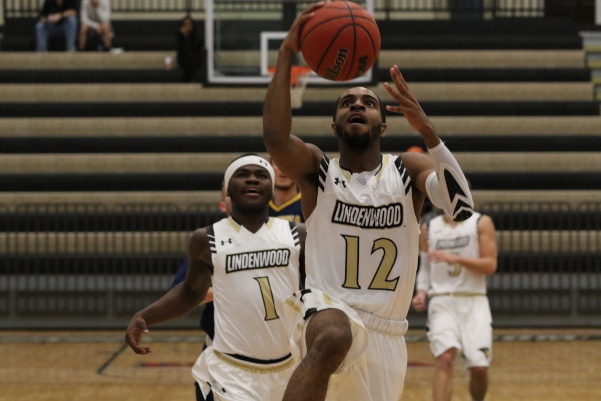 The men’s basketball team started hot and continued to pour it on in their 81-56 victory against the Ecclesia College Royals in Saturday’s home matchup.

The Lions came out sharp on both ends of the floor and never gave Ecclesia College a lead.

In total, Lindenwood had only three players in double digits with junior Chandler Diekvoss leading the way with 20 points complimenting his.

Although only one player surpassed the 20 point mark, all hands were on deck as ten of the 11 Lions with playing time contributed to the points column.

The Lions were bailed out of low assist numbers (19) by capitalizing on fastbreak and turnover points with a combined 34 points.

Another heavy hand in the game was Lindenwood’s battle for 20 second-chance points. Although the Lions were outmatched by the Royals in both field goal and three-point percentage, the Lions brought down 24 offensive rebounds and kept Ecclesia College to just five.

The Lions close out the dominant three-game homestand 3-0 winning all three games by 25 points.

Lindenwood now sits at a record of 6-1 with MIAA conference play beginning against Pittsburg State University in Pittsburg, Kansas on Thursday, Dec. 7.

Pittsburg State waits for the Lions with a 5-3 record and a 0-1 conference loss after a 101-89 loss to University of Nebraska-Kearney.

The Lions return to the Hyland Arena on Dec. 16 in a conference matchup against Washburn University.