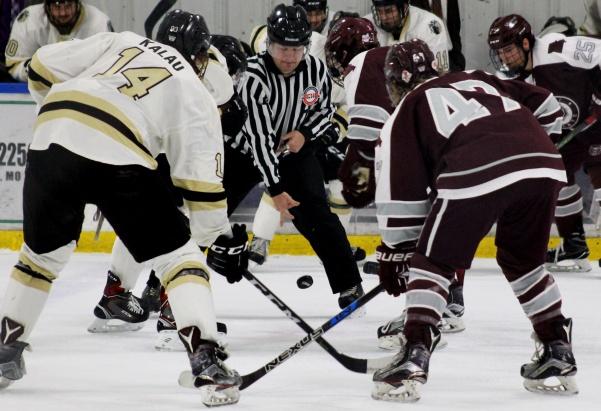 Forward Alex Kalau at the face-off against Missouri State on Nov. 11 at the Wentzville Ice Arena. Kalau had two assists on Dec. 2 against the University of Illinois at the Illinois Ice Arena. File photo by Kayla Bakker.

The Lindenwood ACHA DI men’s hockey team ended a three-game losing streak this weekend against the University of Illinois.

Friday night’s game played at 7 p.m. at the Illinois Ice Arena saw an overtime loss for the Lions.

The singular goal from the Lions during Friday’s game came from sophomore forward Jordan Klimovsky in the first period, and the Lions had already outshot the Illini 18-3, according to the Lindenwood Hockey Twitter account.

The Illini tied the game in the second period, and no scoring in the third period from either team forced the game into a 3-on-3 overtime.

A breakaway Illini player could not be stopped by Lindenwood’s defense and the Lions fell 2-1.

The first period of Saturday nights game remained scoreless from both teams, but the Lions initiated scoring in the second period, giving them a 2-1 lead over Illinois after forward Tommy Heinzman scored his first power play goal of the game with assists by Alex Kalau and Aapo Nurminen. Heinzman lit the lamp again during the second period for his second power-play goal of the game with another assist from Nurminen and Jake Townsend.

Freshman forward Zach Mitchell opened the scoring in the third period with his first collegiate goal on an assist from Dom Kolbeins. The Lions continued to hold off the Illini and senior forward and captain Mike Lozano scored with only 25 seconds left on the clock with another assist for both Kalau and Townsend.

The Lions win put them at a 14-3-4 ranking in the ACHA before the winter break begins, according to the Lindenwood Student Life Sports.

Games will resume again in 2018 on Jan. 6 and Jan. 7 at the Wentzville Ice Arena. The Lions will face the University of Ohio again at 7 p.m. on Saturday evening and 2 p.m. on Sunday afternoon.