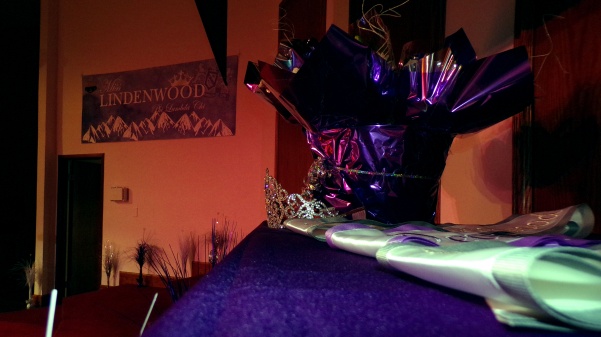 Miss Lindenwood was hosted by Phi Lambda Chi on Dec. 2 to raise money for the fraternity's philanthropic organization, "Backstoppers."
Photo by Arin Froidl

The fraternity raised the money for its philanthropy organization, BackStoppers, a financial assistance organization for families of police officers, firefighters and paramedics/EMTs who have lost their lives in the line of duty. Phi Lambda Chi holds multiple events a year to support BackStoppers. However, this is by far the largest event.

Junior Harry York, head chairman of philanthropy, has been planning this event since the beginning of summer, and contestants signed up for the pageant in September.

“It’s really nice to see members of Greek life work so hard for a good cause,” said sophomore Jordyn Lockhart, a member of Phi Sigma Sigma.

“I’m excited to see all these beautiful women get up there and rock it,” said sophomore Jordan Kirkwood, one of four contestants, before the show began.

The longest category by far was the talent category where the girls displayed their skills ranging from dancing to painting to comedy acts.

A few stand-out moments were when senior Erika Pappa performed a heart-wrenching dance number commenting on the way girls view themselves, and when junior Katelyn Marshall challenged an audience member and junior Ryan Kopp to a “Just Dance” dance-off.

“I feel like this really brings the community together,” Kirkwood said. “I think that’s going to be good to see.”

Junior Shane Henderson and his girlfriend, junior Posy Durr, kept the audience entertained with dancing and karaoke between categories as the comedic emcee duo.

“A lot of public embarrassment, but it was fun,” said Durr about her emcee role.

The couple kept the audience engaged by including them in their antics onstage.

The night ended with the crowning of the winners of the four titles: People’s Choice, Second Runner-up, First Runner-up and Miss Lindenwood.

As for her first act as Miss Lindenwood 2017, Gehner said, “I’m going to go to Taco Bell, and that’s about it.”

Judge Julie Feesler, commonly known as Julie the lunch lady, said she liked to see the girls present themselves “in a way that would be exciting and talented and resourceful and creative.”

York said that the event this year’s event was “very successful,” and they will be back next year for the fourth annual Phi Lambda Chi Miss Lindenwood competition.