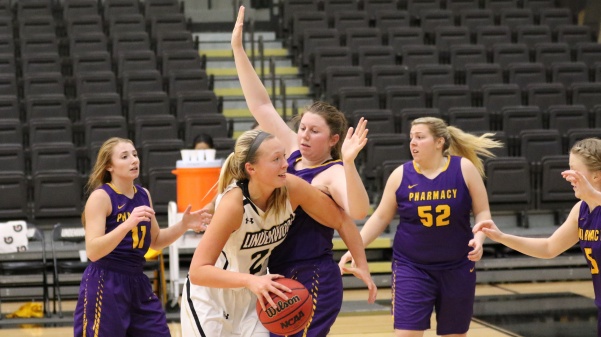 Kallie Bildner, No. 25, dribbles inside the paint in Lions' 82-41 win over Saint Louis College of Pharmacy on Nov. 27. Bildner finished the game with 22 points and 13 rebounds.
Photo by Walker Van Way

The women’s basketball team will look to continue its hot start as the Lions (7-0) face Pittsburg State University (6-2) on 5:30 p.m. Thursday in Pittsburg, Kansas.

Fresh off a record-setting 113-30 win over Central Christian College, the Lions will play their first conference game of the season against the Gorillas. In conference games last season, Lindenwood posted a record of 7-12 in the MIAA conference.

Meanwhile, Lindenwood lost the two regular season matchups against Pittsburg State, but eliminated the Gorillas in the MIAA Tournament.

The Gorillas began the year 6-0 but have lost two straight games to conference opponents Nebraska-Kearney and Fort Hays State. Despite playing eight games, Pittsburg State will play their first home game of the season against the Lions.

Sophomore forward Gabby Walker believes the team is prepared for its first conference matchup of the season.

“We have been working really hard this week preparing for this game and feel we are ready to take on Pittsburg State,” Walker said. “Hopefully bring back a win.”

Lindenwood’s tough defense has been one reason for remaining undefeated this season. The Lions rank second in the NCAA Div. II in scoring defense, holding opponents to 47.1 points per game.

Bildner will look to continue her strong start as the Lions aim to get their first conference win of the season.

“Getting any conference game is huge, but getting the first win on the road at Pittsburg State is very important,” Bildner said. “Not only are they a powerhouse in the conference, but it also sets the tone for who Lindenwood women’s basketball is and what we are trying to accomplish.”