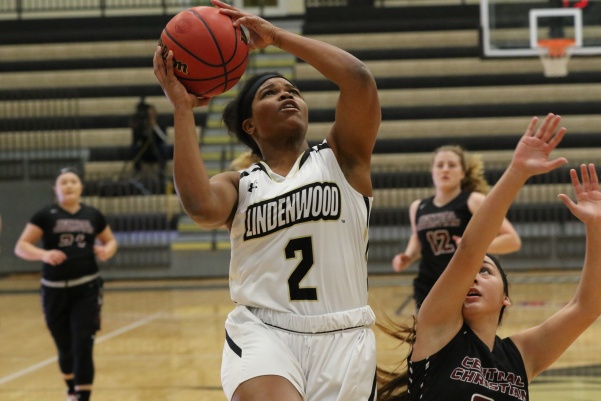 Charisse Williams, No. 2, drives to the bucket in the Lions' 113-30 win over Central Christian College on Dec. 1. Williams scored 11 points in the team's loss on Thursday.
Photo by Walker Van Way

The women’s basketball team is no longer undefeated as the Lions fell 87-75 to Pittsburg State Thursday night in Pittsburg, Kansas.

At the end of the first half, Lindenwood led the Gorillas 40-32 with the help from Charisse Williams, who shot 4-4 from the field tallying 11 points.

“We came out in the first half ready to go, but the tides changed in the second half and we have to find a way to not allow that to happen,” sophomore forward Kallie Bildner said.

Lindenwood was outscored in the second half 55-35 and committed 11 turnovers. The Lions had 21 turnovers during the game.

Sophomore guard Lindsay Medlen led the Lions in points scoring 17 points while shooting 5-10 from the field, a season high for Medlen.

Kallie Bildner scored 15 points along with 12 rebounds for her seventh double-double on the season.

“We have to learn from the loss and get ready to go on Saturday,” Bildner said.

Lindenwood will look to capture its first conference win against Missouri Southern State University at 1:30 p.m. on Saturday in Joplin, Missouri.