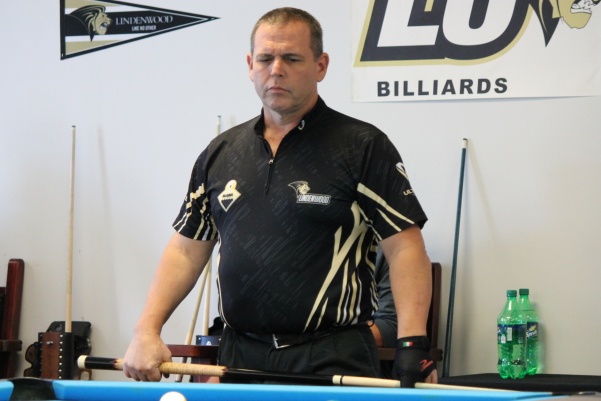 Alan Oliver eyes the table during a match against Salvo's Slayers. Oliver went 1.5-0.5 on the day.
Photo by Walker Van Wey

The Lindenwood billiards team has no shortage of young talent, but it also has 56-year-old rookie Alan Oliver working to make the team successful.

After working in the manufacturing industry for 30 years, Oliver found himself stuck in the same position that he hoped getting a degree could help him escape. When he decided to get his master’s degree in business administration, he made the decision to come to Lindenwood for one major reason.

“The billiards program is why I’m here,” Oliver said. “I had been talking about getting an MBA for awhile, and it wound up plausible to come back full time and be able to play pool full time. Lots of places offer MBAs, but Lindenwood was the only one with a pool team and a coach like Mark Wilson.”

“He goes a long way out of his way to be helpful because he knows where I’m trying to go with the team and the sport, and he has the same vision,” Wilson said.

Helping to improve the image of billiards to a respectful competition from smoke-filled pool halls seems like an uphill climb at times, but Oliver knows that a positive first impression goes a long way.

“People come into our pool room because they want to play better pool,” Oliver said. “I don’t want them to have that feeling of being sized up or intimidated. If it makes somebody more comfortable for me to introduce myself and shake their hand, then I’ve achieved my goal.”

Another major goal of Oliver’s since joining the team was simply to “improve as much as possible,” something teammate Brandon Vanoverbeke has witnessed.

“Alan has so much love for pool, and all he wants to do is better himself,” Vanoverbeke said. “He’s come a long way even since he first joined.”

A major step to that quick improvement was realizing most of the people Oliver would be asking for guidance weren’t even born yet when he started playing.

This willingness to learn took Oliver from a run-of-the-mill shooter at Cue and Cushion, a pool hall in Overland that Oliver frequents, to top 10 in the 2017 collegiate national tournament.

“I’m 56, and I’ve been with the program for four months and placed ninth at nationals; that isn’t a minor thing,” he said.

Oliver’s MBA program ends in March, but as long as he qualifies for nationals before his program is over, he is still eligible for the tournament this summer.

“I’d like to get back to nationals with the purpose of representing my team,” Oliver said. “This is a program that’s picking up speed because of its success, and I enjoy being a part of that.”

“He’s just so passionate about it,” Wilson said. “It couldn’t be a more glowing compliment to the program and the sport for him to want to join a bunch of kids half his age and put in the effort that he does.”

Although no matches have been scheduled yet, Oliver and the Lindenwood billiards team resume competitive play in the spring semester.