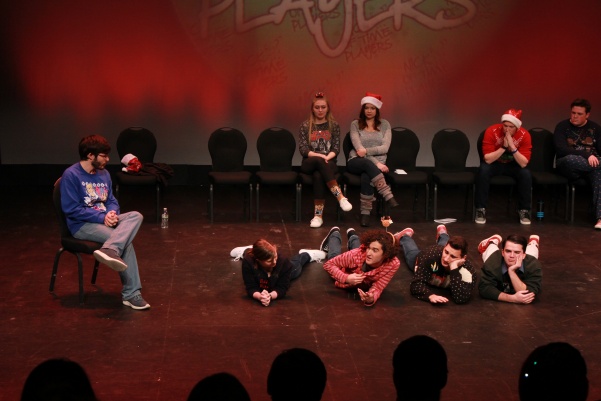 In the improv game of 1-7, 7-1, the game will start from one actor doing a scene alone. Then, one by one actors come onstage and change the scene to something completely new. Once all seven actors are onstage, one by one, they will leave the stage ending it in the one actor scene where the game started.
Photo by Lindsey Fiala

The Nick of Time Players took over the Emerson Black Box Theatre for their final show of the semester Tuesday night.

The troupe played a mix of improvisation games of which many were familiar from their previous shows throughout the years, including “Playground Insults,” “7-1, 1-7,” “Tag,” and “Countdown.”

However, Director of the troupe Larry Quiggins also introduced two new games, Sounds like a Song and Improv Dance. He said he hopes to incorporate music more in their shows in the future.

“Jacob [Sellers] is in the troupe and he is an accomplished piano player so there is no reason not to utilize a musician we have,” said Quiggins.

Another new flair coming up with their shows will be a long-form improv, which the troupe is going to begin rehearsing in the spring.

Quiggins said it is a very different type of improv comparing to the style they are performing now.

[perfectpullquote align=”right” cite=”Larry Quiggins” link=”” color=”” class=”” size=””]”That’s one of the big things I teach them at first about is that you cannot have shame because you’ll never know what kind of situations [you’ll be in].” [/perfectpullquote]

“Tonight was short form,” said Quiggins. “Long form would last the whole evening and be a complete full length show. They would do two separate scenes and then tie them together in a third scene and it’s all improved.”

Quiggins said the troupe had several new freshmen joining this semester, some with previous experience and some without, but they found a good spirit within the group quickly.

“I am very pleased, they all meshed really well as a team and as a troupe, real quick, quicker than normal,” Quiggins said. “That’s one of the good thing about the troupe is that it’s not all seniors.”

Quiggins said that none of the troupe members were afraid to just jump right into.

“That’s one of the big things I teach them at first about is that you cannot have shame because you’ll never know what kind of situations [you’ll be in],” said Quiggins.

Many parts of improv are trial and error, and every show is different.

“The only way to learn, in my opinion, is to get up here in front of people what works and what doesn’t, ” said Quiggins. “I think tonight they learned a couple of things that don’t work.”

The first show of the spring will take place in late January but will not include long-form improv.