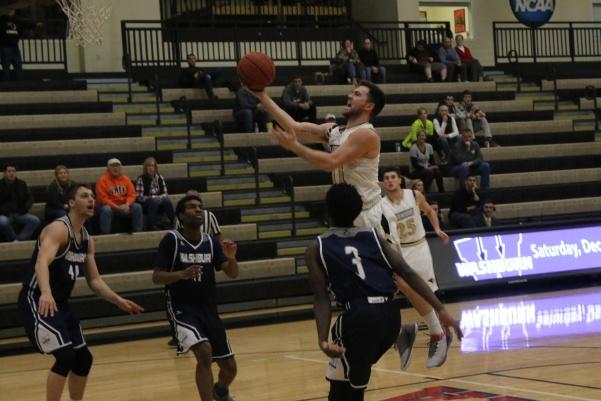 Junior guard Adam Pohlman attempting a lay-up after finishing with a career-high 16 points in Lindenwood's 76-74 loss to Washburn.
Photo by: Walker Van Wey

The Lions fell to 1-2 in the MIAA, which ranks ninth in the conference. Washburn (3-0) is ranked second in the MIAA.

Leading the way in the scoring column was junior guard Brad Newman with 17, followed by Pohlman with 16. Newman has lead or tied for the lead in points in four of the last five games. Pohlman on the other hand, hasn’t been first or second in scoring all year.

“I just shot the ball with confidence tonight,” Pohlman said. “They were leaving me open, and I just wanted to prove I can shoot and score the ball.”

The Lions only turned the ball over eight times on Saturday. Through games played on Dec. 11, Lindenwood ranked third in NCAA Division II in fewest turnovers per game (8.8), according to Lindenwood Athletics.

“You can’t score if you don’t get a shot so I definitely value every single possesion,” Pohlman said. “It’s always been a big part of my game to take care of the ball, and this year I have tried to that thus far.”

Pohlman leads the entire MIAA in steals per game as he’s averaging 2.3 per game.

At the half, Lindenwood trailed 36-29. The Lions were shooting 31 percent from the field, and five of their nine field goals were from behind the arc. Lindenwood’s only lead of the half was with 17:15 left at 3-2.

In the second half, Lindenwood tied it at 41-41 and again at 52-52. They didn’t take a lead until a 3-pointer from Pohlman gave the Lions a 57-54 lead. Three points is the largest lead the Lions would get in the second half. The Ichabods traded baskets with the Lions, but two free throws from center Brady Skeens, who is a career 50 percent free throw shooter, gave Washburn a 71-66 lead that Lindenwood couldn’t overcome.

“We competed well tonight, we just couldn’t get a few stops in a row,” Pohlman said. “I think on one hand it shows we can play with anyone in this conference.”

Coming up on Monday, the Lions will host Emporia State (6-5) at Hyland Arena at 7 p.m.