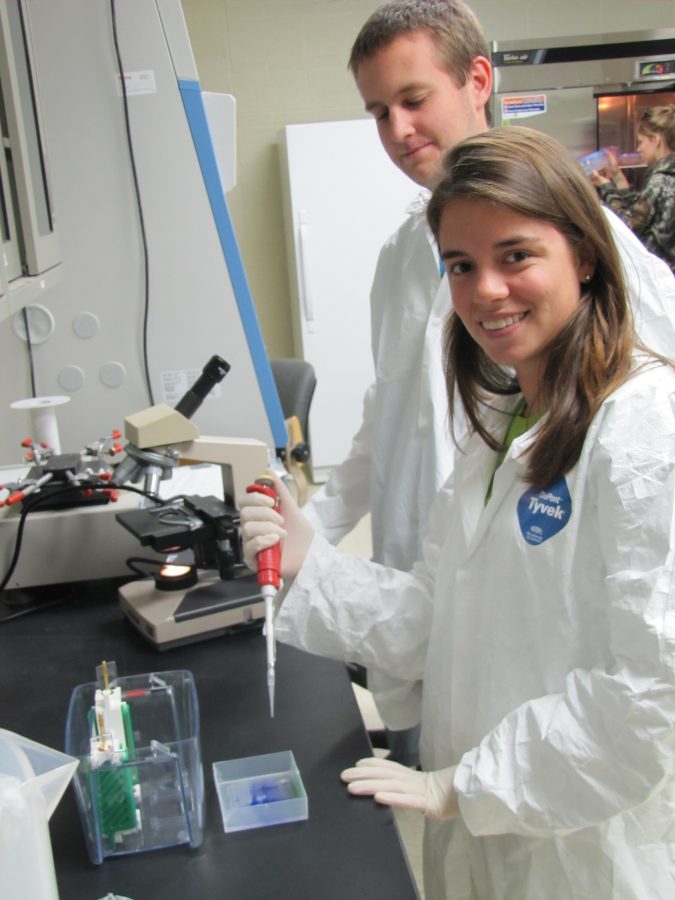 Photo by Gustav Gropp Daniel K. Evans (left) and Valentina E. Baena (right) work on their project. They are both seniors majoring in Biology.

Nobel Peace Prize winner Nelson Mandela once said “For to be free is not merely to cast off one’s chains, but to live in a way that respects and enhances the freedom of others.”

The most recent Nobel Prize winners in Physiology or Medicine, Dr. Shinya Yamanaka and Dr. John Gurdon, are stem cell researchers from different generations, who asked the right questions of science.

They have jointly brought to light the ethical discussion on embryonic stem cell research, and successfully diffused the issue through their work. Dr. David Brown, who chairs the philosophy department at Lindenwood, said that the work done by Yamanaka and Gurdon “was a huge game changer in the whole stem cell debate.”

Lindenwood Professor of Philosophy Dr. Rachel Douchant said that the pro-life supporters feel it is vital to be sure that “we never use human beings merely as means to an end.”

This supports their position that human beings are ends in themselves and should be treated as such. Brown said that the moral question being asked is “where are we getting these [embryos] from?”

The destruction of human life for scientific research is where bioethics rule in favor of life. Brown said “You can’t just kill them because they’re useful or purposeful, any more than you could kill any other kind of human being for those kinds of purposes.”

Douchant also said “The pro-life pro-choice debate is no longer about the humanness of embryos.” She says that everyone agrees that a human embryo contains human DNA, and thus the debate is rather about what she calls “the legal personhood” of the embryo.

The issues surrounding embryonic stem cell research are synonymous with those of abortion. However, Yamanaka’s work brings forward a new era of scientific research using induced pluripotent stem cells (iPSCs), which eliminates ethical issues one by one.

The need for embryonic stem cells has been almost completely removed. Yamanaka’s work now allows scientists to create iPSCs from adult cells found in each of our bodies. Think about taking a skin cell and forcing it back into its basic form, and then using it to repair your kidney.

These cells are called iPSCs because they are forced back into their immature state and can assume any form thereafter. Before Yamanaka’s breakthrough, only cells of matching type could be used for reconstructing an organ.

This means that patients who underwent stem cell treatment ran the risk of their bodies rejecting cells from other donors. This ethical issue arose out of the use of human embryonic stem cells for scientific research.Scientists would harvest immature cells from fetal embryos so that they could be used for growth in any organ.

The Rev. Dr. Michael Mason, chair of the religion department at Lindenwood, said that he has basically avoided the issue of human embryonic stem cell research because “the larger issue of abortion… has become such a polarizing thing that nobody is talking about any of the real issues around it.”

Mason agrees that the issues of abortion supersede those of stem cell research. Should society be okay with placing this debate into an already-stalemate?