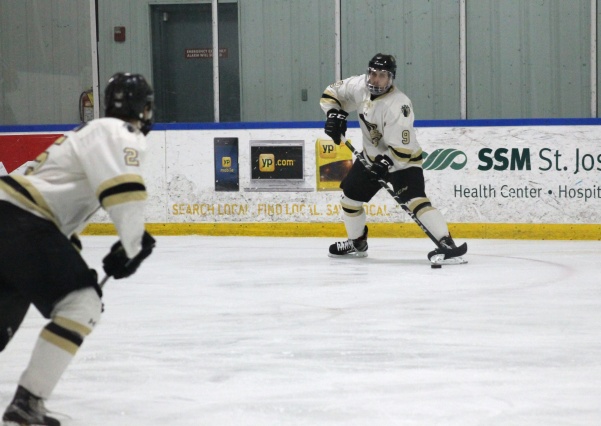 Junior defenseman Tommy Heinzman looks to make a pass to sophomore defenseman Aapo Nurminen during the Lions game against the Missouri State Ice Bears on Nov. 10 at the Wentzville Ice Arena. The Lions defeated the Ice Bears 6-3 during that Friday's game. File photo by Kayla Bakker.

The Lindenwood men’s Division I ice hockey team closed out their 2017 gameplay with a solid fourth place position in the ACHA (American Collegiate Hockey Association), coming in behind third-place Ohio University who the Lions will play this weekend at the Wentzville Ice Arena to start the 2018 leg of their season.

Lions hockey split their last series of 2017 against the University of Illinois in Urbana-Champaign with a 2-1 overtime loss on Dec. 1 and a 4-1 win on Dec. 2.

In an earlier matchup this season with Ohio University, the Bobcats took both games from the Lions on Nov. 17 and 18 at the Bird Arena in Athens, OH. The Lions fell 1-0 during the first game and 4-1 the second game.

“We are looking to get some revenge on our home ice,” said sophomore forward Jordan Klimovsky. “We know we have to come out hard even though both teams had a long break. The second half of the year is like a new season, our record is 0-0-0 for 2018 at the point.”

The Lions will have five more weekends left in regular season play before the Central States Collegiate Hockey League playoffs begin on Feb. 23 at the Ohio University Bobcats’ home arena, then the ACHA Division I National Championship Tournament will be played in Columbus, OH from March 8-15 at the Ice Haus.

This weekend’s games will be played at the Wentzville Ice Arena at 7 p.m. on Jan. 6 and 2 p.m. on Jan. 7 against the Ohio University Bobcats. Both games are available to be streamed online.