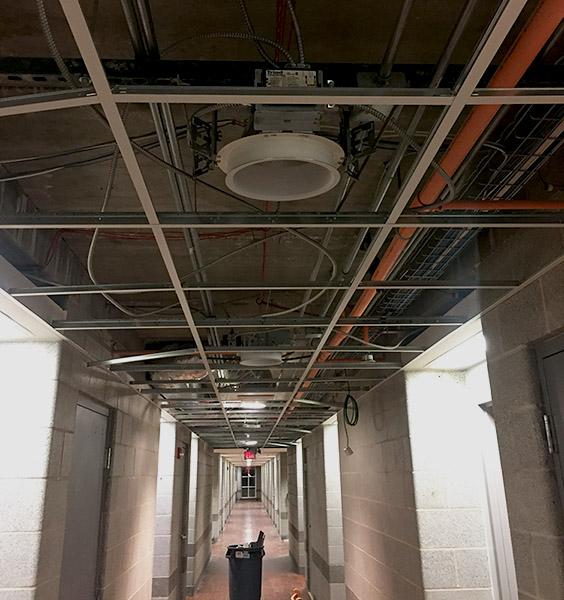 Ceiling tiles are currently being replaced throughout all floors in Mathews Hall and repairs are estimated to be completed by the end of this week. Photo by Dom Kolbeins.

Subzero temperatures over the winter break burst pipes and flooded Mathews Hall, according to an e-mail sent out to residents of the dormitory.

The e-mail, sent by the Office of Residential Life, addressed the eruption of pipes on the fourth floor, which impacted the south end of the building, closest to the softball fields. The second, third and fourth floors were affected.

The e-mail informed residents that facilities management took steps to correct the problem, that some rooms might still need minor repairs and that all the rooms on the second and third floor would be completed by move-in weekend.

But student Dylan Dix, a resident on the third floor, said when he arrived on campus Jan. 6, he discovered his room in disarray.

“When I walked into my room, the beds, dressers and desks were cluttered in the middle of the room with all of our stuff stacked on top,” he said. “There was a layer of dust covering basically everything, there were chunks of drywall all over the floor, and someone left a caulking tool.”

In addition, Dix said: “The huge rug we had in our room must’ve got soaked because when I got here, it was rolled up and in our bathtub and smelled godawful, like it was all moldy. And our towels and bath rugs were in the sink.”

Dix and his roommate said they noticed no further damage to valuables in their room.

New floors have been put in on the second, third and fourth floor, and the ceiling tiles currently are being replaced. The Office of Residential life said that the repairs are anticipated to be completed by the end of this week.

Director of Residential Life Terry Russell and the Associate Vice President of Student Life and Diversity Shane Williamson could not be reached immediately for comment.