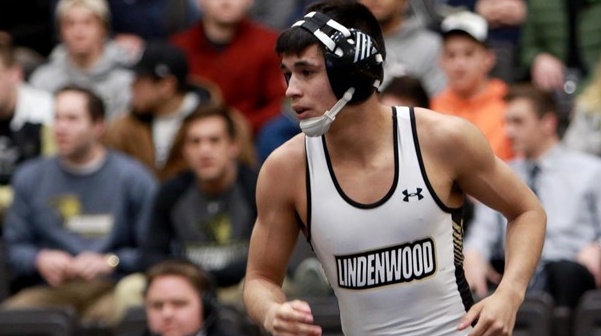 Carlos Jacquez placed first in his weight division at the Midwest Classic on Dec. 17 in Indianapolis, Indiana.
Photo from LindenwoodLions.com.

Hank Likes from Lion Pride Sports at Lindenwood University spoke with Jimmy Rollins, head coach for the wrestling team, during an interview before their spring season began.

This segment is part two of a 10-part series of interviews with the head coaches of spring teams.
The season so far
The Lindenwood wrestling team members competed in a variety of tournaments individually before the new year.

On Nov. 11, the team went to the Maryville Kaufman-Brand Open in St. Louis where they had two members place first. Carlos Jacquez and Hunter Haralson placed first in their respective weight classes.

The following weekend, the team hosted the Lindenwood Open at the Hyland Arena in St. Charles. Nate Trepanier placed first in the 157-pound weight division.

At the start of December, the Lions headed north to Kenosha, Wisconsin, for the Jim Kock Open. Eight members of the Lindenwood team placed during the Dec. 2 tournament. Jake Bargmeyer, Sam Penningson and Jacquez placed second in their respective weight classes. Haralson and David Hamil both placed third in their weight divisions.

Just after the fall semester ended, the Lions were in Indianapolis, Indiana, for the Midwest Classic on Dec. 17. There, the team placed three wrestlers for the first time in program history. Jacquez was the only one to take first place out of the Lions who competed.

On Jan. 7, the team hosted Ouachita Baptist University at the Hyland Arena for a team competition. The Lions defeated Ouachita with an overall score of 48-0.

The team will head to Kearney, Nebraska, on Jan. 13 to compete in the Midwest Duals tournament.