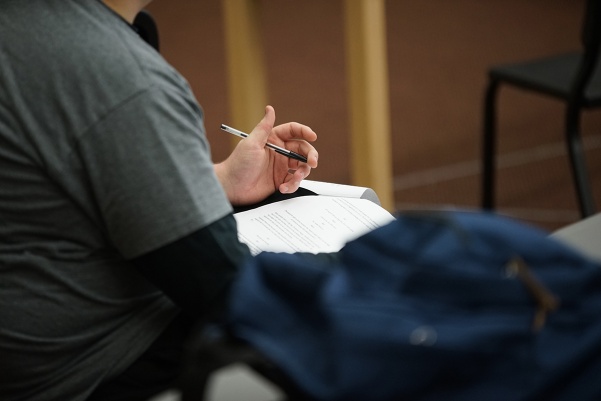 Notes are taken on a script.
Photo by Mitchell Kraus

At 7 p.m. Friday, a group of students gathered their laptops, blankets, pillows and large amounts of coffee and gathered to write five short plays overnight.

They came together as part of Alpha Psi Omega’s 24-hour play festival, an annual event where theater students challenge themselves to write, design and rehearse original plays within one day. The performances, open to the public, begin 24 hours after the writers are permitted to begin.

Four positions are available to participants: writer, director, crew or actor. Some of the writers choose to stay on as actors or directors, meaning they must survive on just a few hours of sleep. Gallons of coffee are brought in to keep them going.

At the kickoff of the night, APO President Jake Blonstein announced this year’s theme: “Obsession.” Then he delved into a couple of ground rules.

Writer Wil Spaeth frowned at his laptop at the back of the room.

In the end, all five plays were complete by the time the directors came around at 6:30 the next morning. The writers who were staying on to act or direct lay around the J. Schidegger Center, catching a few hours of sleep before they had to begin again.

After hours of rehearsal, tech rehearsals began in the middle of the afternoon, where the lighting and stage layout were finalized. A very quick dinner break followed before the final dress run-though happened just minutes before doors opened to the audience.

To keep things moving along, sets and props were kept to a minimum. Most of the plays used only a few pieces of furniture and props recycled from past performances at the theater.

As the time clock ran out, everyone got excited.