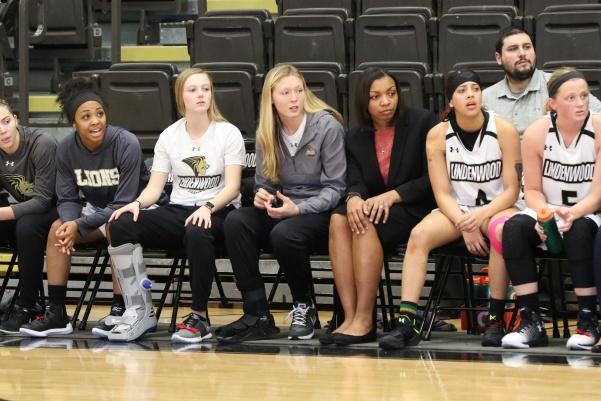 Kallie Bildner (grey jacket) watches as the Lions lose 71-65 to Missouri Southern on Thursday. Bildner missed her second straight game on Saturday due to injury.
Photo by Walker Van Way

The losing streak continued Saturday afternoon as the women’s basketball team dropped a game 80-68 to Pittsburg State at Hyland Arena.

Despite trailing for the majority of the game, the Lions were able to cut Pittsburg State’s lead to three at the end of the third quarter. However, the missed free throws came back to haunt Lindenwood as the Gorilla’s outscored the Lions 21-11 in the fourth quarter.

Both teams shot poorly from the free throw line as Pittsburg State went 7-12, while Lindenwood went 12-20 from the line.

Sophomore forward Gabby Walker only played eight minutes after fouling out with 3:55 left in the third quarter. Walker, who averages 13.4 points per game, was held scoreless in the game.

“All the credit goes to my teammates who did a great job finding me and getting me really quality looks,” Ferguson said.  “We did a great job as a team trying to move the ball, and those open looks could have been for anybody.”

Ferguson averages 4.5 points per game and was certainly in rhythm on Saturday. Despite having a season high in points, she continues to look for ways to improve her game.

“I’m always working on improving every aspect of my game,” Ferguson said. “There’s no area of my game I feel doesn’t need continued work, so I plan to work on it all.”

With this loss, Lindenwood falls to 10-7 and will play its next game against conference opponent (9-6) Southwest Baptist University on Jan. 18 at 5:30 p.m. in Bolivar, Missouri.