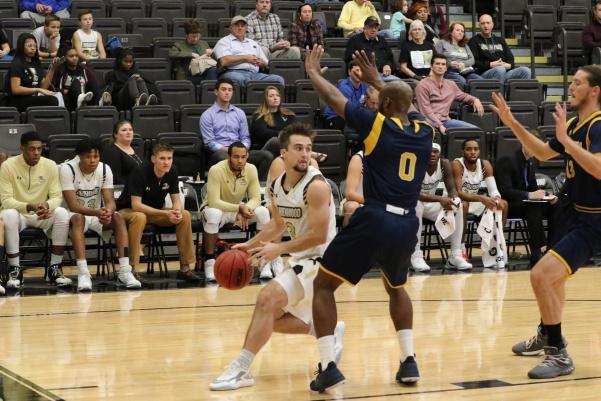 Leading the way for the Lions was junior guard Jackson Price who finished with 18 points. He’s now scored 13+ points in 6 of the last 7 games.

“Those numbers don’t mean anything if we’re not getting the win,” Price said.

The Southwest Baptist Bearcats are 8-3 at home this year, including a 2-1 record from home court in the MIAA.

In the first half, Lindenwood struggled shooting from the field. The team posted a shooting percentage of 34.5 which is well below its 45.6 percent season average. The team scored the second-fewest points (23) in the first half all year.

“We missed some shots,” Price said “We felt like if we kept the course that eventually that would balance out.”

The Lions entered the halftime break down 31-23 after being held to only three points in the last seven minutes of the half, according to Lindenwood Athletics.

Lindenwood started out the second half on a 6-0 run, forcing a Southwest Baptist timeout.

“Hopefully we don’t get in that big of a hole. We were fighting; that was our mindset and just keep going and good things will happen if you play hard,” Price said.

The run consisted of a full team effort. Price, Brad Newman, Chandler Diekvoss and Adam Pohlman scored during the run and all of them finished the game with double-digit points.

“Jackson has really found his stroke. He had a great defensive game as well,” head coach Lance Randall said. “Newman had another great game, Pohlman hit a crucial 3 at a big time during the game.”

“He made great decisions,” Randall said. “He got a ton of rough rebounds that were 50/50 balls. He’s a smart, tough kid. He was instrumental in our success tonight.”

Once the Lions got the lead back, they wouldn’t let it go as Lindenwood closed the game out and got a 68-60 victory over the Bearcats.

Lindenwood will travel to Warrensburg, Missouri, to face off against the University of Central Missouri (14-3) at 3:30 p.m. on Saturday.