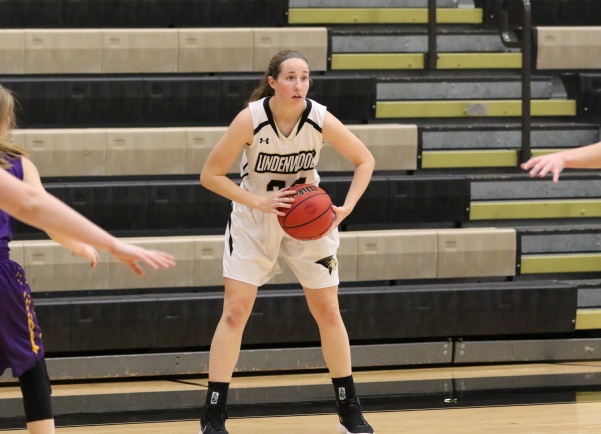 Megan Foster (No. 32) looks to pass in Lions' 82-41 win against St Louis College of Pharmacy on Nov. 27.
Foster had season high 14 points in teams' loss on Thursday.
Photo by Walker Van Wey

After the game was tied 31-31 at halftime, Lindenwood was outscored 36-22 in the second half. The Lions made just seven shots and shot just 24.1 percent from the field.

Lindenwood was out-rebounded 47-44 and had 23 turnovers. The Bearcats scored 20 points off the Lions’ turnovers.

Guard Megan Foster led the Lions with 14 points on 5-9 shooting. This was the most points Foster has scored all season.

Forward Kallie Bildner returned to the lineup after missing the last two games because of an injury. Bildner tallied seven points on 3-9 shooting and dominated the glass with 22 rebounds in 37 minutes.

“It felt great; [it] didn’t even feel like I had been out with an injury,” Bildner said.

“We are facing adversity right now,” Bildner said. “We just have to find a way to get through and finish the season strong.”

The 10-8 Lions will look to get back in the win column when Lindenwood plays conference opponent University of Central Missouri at 1:30 p.m. on Jan. 20 in Warrensburg, Missouri. Central Missouri is undefeated in conference play (8-0) and has won 11 straight games, taking its record to 14-1 on the season.