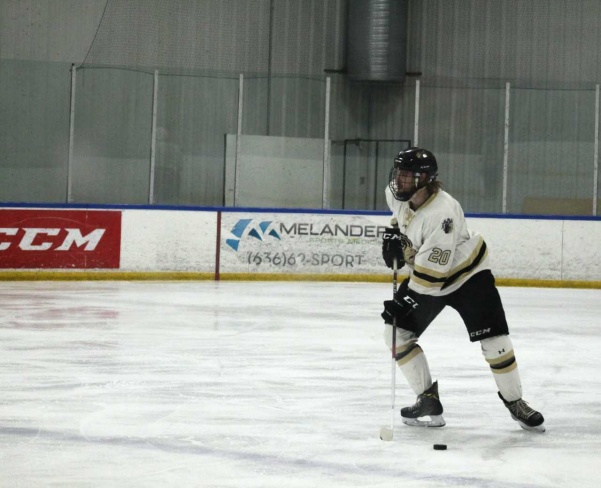 Senior defenseman Brett Bauza looks to pass the puck against the Missouri State Ice Bears at the Wentzville Ice Arena. Bauza will be one of six seniors honored before Saturday's game.
File photo by Kayla Bakker.

The Lindenwood men’s Division I ice hockey team will finish its last home series celebrating the seniors and inviting fans to skate with their favorite players after the game.

The Lions moved to third in the latest American Collegiate Hockey Association rankings with a current overall record of 16-3-4. They will host sixth-ranked Central Oklahoma on Friday and Saturday at the Wentzville Ice Arena.

In early October, the Lions faced Central Oklahoma at the Arctic Edge Ice Arena in Edmond, Oklahoma. The Lions won the first game 2-1, but lost to the Bronchos in overtime 3-2 in the second game.

All fans attending Friday night’s game are asked to wear black to participate in the blackout. Before the game Saturday, the Lions will honor their six seniors, then hold a postgame skate where fans, family and friends can skate with their favorite Lion. Free skate rental will be provided.

“It might sound like a cliché, but hockey is honestly so much more than just a sport, especially when you get the opportunity to represent a hockey program like the one we have at Lindenwood,” said senior forward Alexander Carlsson. “I’ve been fortunate to play with the best group of guys I could’ve asked for and we share unforgettable memories together. My four years with Lindenwood hockey has taught me what it takes to succeed, not just in hockey, but in life.”

This weekend’s games will be played at Wentzville Ice Arena for the last home series of the season. Puck drops at 7 p.m. on Jan. 19 and 4 p.m. on Jan. 20. Make sure to arrive early on Saturday for the senior ceremony starting at 3:45 p.m. Both games will be streamed online.