DECA is back in business 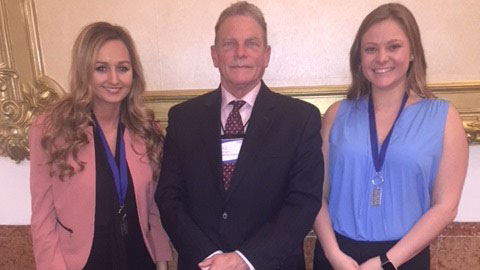 Savannah Bice, Craig Felzien and Monica Friedman in New York after both women won the top prize at the Collegiate DECA National Competition Nov. 9-11.
Photo provided by the Plaster School of Business and Entrepreneurship

The newly appointed adviser for Lindenwood’s Distributive Education Clubs of America team is the first adviser to come for the School of Business.

Craig Felzien, director of the Duree Center for Entrepreneurship in the Hammond Institute for Free Enterprise, was appointed the new director of Lindenwood’s DECA team back in November after the Dean of Plaster School of Business and Entrepreneurship Roger Ellis asked him to take the position.

“I was asked to go to New York by the dean of the school to chaperone the DECA team as they go to national competition, and I said sure,” Felzien said. “A few days before we left he said they would really like me to be the next adviser, and I said sure, not having known anything that it involved.”

Once in New York City, Felzien said he was very impressed by the six students who went from Lindenwood as well as the hundreds of other students from all around the United States competing there.

Felzien plans on making DECA a big part of the Duree Center for Entrepreneurship.

One way he plans on making this happen is with a new DECA consultancy firm, where students from DECA will help local business and governances solve business problems.

“It will give us real-world experience and maybe opportunities for internships and job opportunities,” Felzien said. “It will also help us stay sharp for competitions.”

Savannah Bice, student adviser for DECA, said that Felzien has been a great adviser so far.

“We had struggled to get an adviser that was within the School of Business for some time,” Bice said.

The previous School of Education, Cynthia Bice, was the acting adviser of DECA before Felzien.

“It was hard for her to be implemented into everything because she wasn’t in the School of Business,” Savannah Bice said. “The first time I met Craig, I could tell he was very connected with companies in St. Louis and he didn’t really know what DECA was until he went to the competition in New York and was basically sold on it.”

Savannah Bice said that Felzien has done really well with his leadership and understanding of the team.

“He comes and asks the students for advice as much as we ask him for stuff,” Savannah Bice said. “There is a good balance; he is not trying to take something over. He has been really patient with me and the other students and has really listened to us and respects our opinions.”

Savannah Bice said that with Felzien’s connections in the School of Business, he is able to get everyone hyped about DECA.

“So far I have found 14 faculty members in the Plaster School of Business who have agreed to be faculty advisers in our DECA consultancy,” Felzien said.

Felzien said he is all in when it comes to being the DECA advisor and is going to continue to come up with new ideas to put DECA out there, not only in the School of Business but all around Lindenwood as well.

“We want to let students know that they don’t have to be in the School of Business to be on the DECA team,” Felzien said. “It can have a real crossover potential for anyone who wants to think creatively and in an entrepreneurship way.”