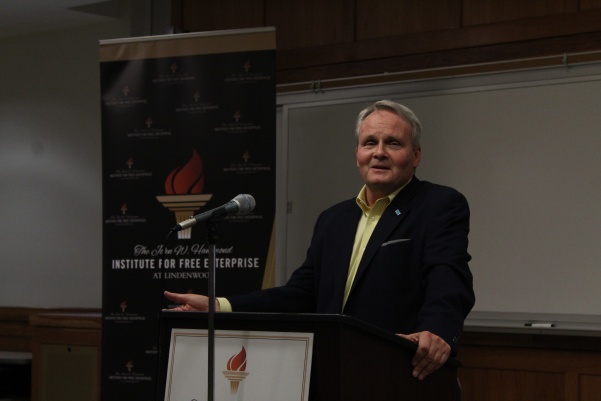 John Law and Louis XV printed more money than they knew what to do with. Andrew Mellon was a businessman who knew a thing or two about currency.

Larry Reed, president of The Foundation for Economic Education, held a “pep talk” for students and community members, where he discussed economics through historical story examples.

“Can you hear me, can you hear me all right in the back?” asked Reed. “I always like to ask that because I can be soft-spoken or you can be hard of hearing.”

Reed then proceeded to tell a joke about a hard-of-hearing husband talking to his wife.

The crowd erupted into laughter.

“I was asked to come in and talk to you about economics and its importance,” said Reed.

Reed told a total of five stories, the first two being examples of bad economics and the other three being good examples.

“A lot of the students are economics students so it was good for them to hear from someone other than [professors],” said Howard Wall, professor of economics.

According to Wall, Reed was able to visit Lindenwood while in town for another conference.

“The event went really well,” Wall said. “We were able to get quite a few people from off campus to come, which we weren’t expecting. So that was a good bonus.”

Reed continued to use examples, even until the end of his talk, to show how economics have worked throughout history.

“Even in the most challenging of circumstances, like Germany in 1945, when it may have been tempting for people to think that only a handful of experts with power can fix this problem, it is actually the absence of that that fixed the problem,” Reed said.

After his talk, Reed opened the floor for questions from the audience, which was a great success in continuing the conversation and keeping the audience attentive.

Audience members asked questions ranging from inflation to environmental issues. Reed also brought up the issue of not thinking ahead when making decisions in economics.

“Thinking long-term often means telling people ‘I can’t get you that. It’s not mine to give,’” Reed said. “That is future thinking that most people can’t get their arms around.”

Reed went overtime with answering questions because of how engaged the audience was with him.

The Hammond Institute for Free Enterprise will continue to put on events like this one throughout the semester for students and community members alike.