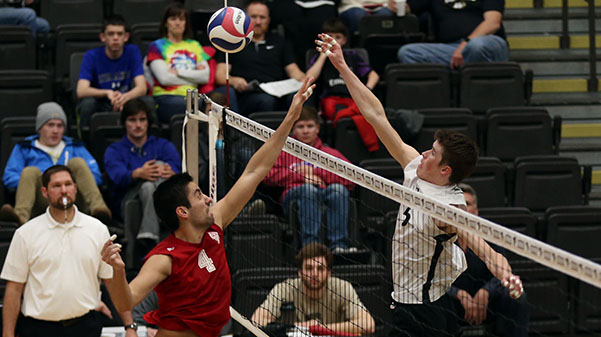 Lindenwood volleyball player Adam Brewster (white jersey) hits the ball. The Lions have opened the season with a 5-2 record and will look to get two wins against Grand Canyon and Lincoln Memorial this weekend.
Stock photo by Carly Fristoe

Here are the Lindenwood sporting events on campus Jan. 29 – Feb. 5. Students can earn points by checking into events on the Lindenwood Lion Pride app. Points can then be redeemed for prizes, including free Under Armour shoes and Papa John’s pizza. The app is available for free download on  Apple’s App Store and the  Google Play store.

The men’s wrestling team is coming off the back of a 6-29 team loss against Nebraska Kearney on Jan. 25 and will be looking to even up its 4-5 record when they take on Central Missouri on Wednesday. The only Lindenwood wrestlers to win their bouts against Nebraska-Kearney were 125-pound Carlos Jacquez and 133-pound Hunter Haralson. Intermat Wrestle currently ranks Jacquez as the fourth best 125 pound wrestler in Division 2, whilst Haralson is ranked number eight.

The men’s volleyball team (5-2) will look to continue their strong start to the season with back-to-back games against Grand Canyon (8-2) and Lincoln Memorial (3-2). The Lions are coming off the back of a strong 3-1 victory over Sacred Heart on Jan. 26. Nathan Van Dellen has been the Lions focal point on attack this season. Van Dellen has recorded 68 kills and is hitting .247.