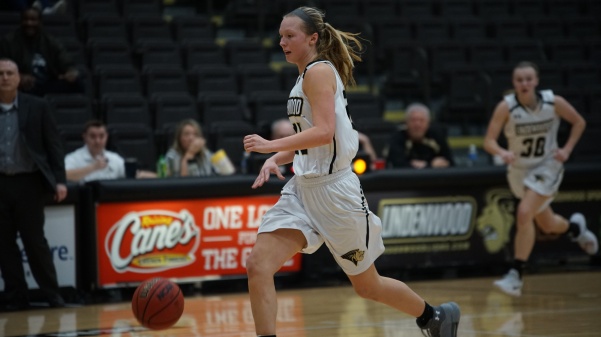 Forward Kallie Bildner dribbles down the court in the Lions' 80-78 loss to Nebraska-Kearney back on Jan. 25. Bildner registered 23 points and grabbed nine rebounds in the loss.
Photo by Mitchell Kraus

From the opening tip, Lindenwood led the Griffons the entire game. The Lions had a 31-23 lead going into halftime after shooting 46.2 percent from the field, while Missouri Western State shot 32 percent.

In the second half, Lindenwood and Missouri Western each tallied 32 points as the Lions went on to win by eight points.

The Lions had two players recording double-doubles. Forward Kallie Bildner tallied 20 points and notched 10 rebounds. For Bildner, this is her 12th double-double on the season.

“We had a lot of energy throughout the entire game, including the bench,” Bildner said.

Coming off the bench, forward Gabby Walker scored 21 points and grabbed 14 rebounds for her fifth double-double of the season. Walker accounted for all the team’s 21 points scored off the bench.

“It’s huge to get back in a winning mode,” Walker said. “All we can do now is keep working hard and thrive off this new energy.”

The Lions snapped their seven-game losing skid on the road win while improving their road record to (3-6).

“To get wins on the road, that is what you need, and we were able to get things going back in the right track,” Bildner said.

Following the win, Lindenwood is back to .500 with a record of 11-11 and will play the next game against conference opponent Northwest Missouri State Feb. 3 in Maryville, Missouri.