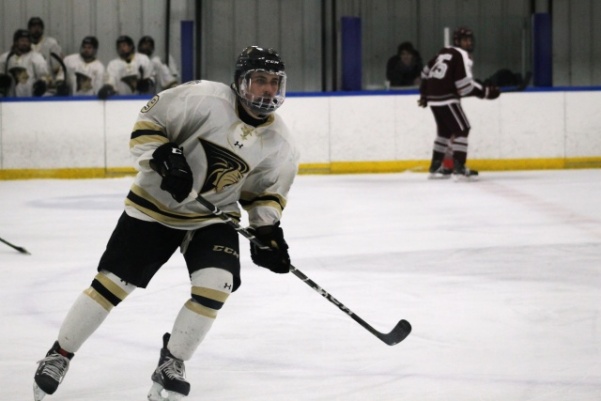 Junior forward Tommy Heinzman skates down the ice at the Wentzville Ice Arena. Heinzman scored a goal in both games against Iowa State University on Feb. 9 and 19 at the ISU Arena in Ames, Iowa.
Photo by Kayla Bakker

The Lindenwood D1 men’s ice hockey team extended its winning streak to seven games with a sweep over the Iowa State University Cyclones this weekend.

With a late comeback and an overtime goal, the Lions beat the Cyclones 3-2 on Friday, Feb. 2, at the ISU Arena in Ames, Iowa. On Saturday the Lions shut the Cyclones out as they won 2-0.

The Cyclones scored first with back-to-back goals before senior forward Mike Lozano put the Lions on the board. With three minutes left in the third period, sophomore defenseman Aapo Nurminen scored to tie the game. Junior forward Tommy Heinzman scored in overtime, ending the game with a win for the Lions.

Heinzman added another point Saturday when he scored the first goal of the game to lead the Lions to their 2-0 win. Junior defenseman Jake Townsend scored an empty-netter goal for the Lions second point. Freshman goalie Cooper Seedott stopped all 26 of the Cyclones’ shots to get the shutout.

“It meant a lot to get a shutout on Saturday, but it was better to win both games as a team, especially Friday because we were down 2-0 due to a slow start, but we were able to overcome adversity and get the two points we needed,” Seedott said. “Everyone has been on board this season to win which is a key factor for us, we need all 23 guys to contribute to the team and we have been successful thus far.”

The Lions next play Robert Morris University in Chicago, Illinois, at the Edge Ice Arena on Feb. 9 and 10. Both games will be streamed online when the puck drops at 7 p.m.