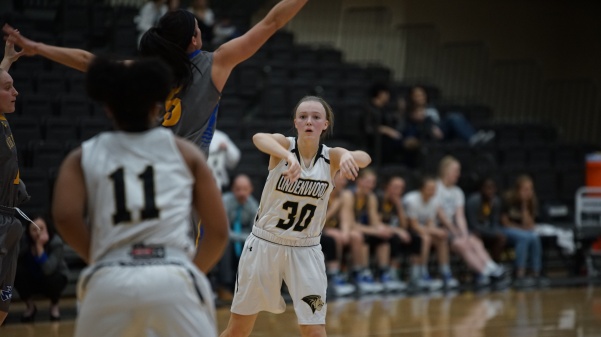 Guard Lindsay Medlen pass the ball in the Lions' 80-78 loss to Nebraska-Kearney back on Jan. 25. Medlen scored 8 points in the loss.
Photo by Mitchell Kraus

Lindenwood controlled the entire game from start to finish as the Lions led 43-22 at halftime and never looked back. The Lions held its largest lead in the fourth quarter leading the Bearcats by 32.

Meanwhile, the Lions out-rebounded the Bearcats 43-27 and had 15 offensive rebounds which led to 17 second chance points.

Lindenwood received contributions from its bench with 38 points being scored. Forward Gabby Walker led the bench by scoring 14 points and seven rebounds. Walker is averaging 13.5 PPG and 6.7 RPG coming off the bench.

Following Saturday’s win, it was the first time the Lions won back to back games since dating back to Dec. 18th and 19th.

The Lions will look to make it three straight when it hosts conference opponent Lincoln University of Missouri Saturday, Feb. 10 at 1:30 p.m. at Hyland Arena.

“We plan on continuing to prepare ourselves the best we can for these upcoming opponents, ” guard Kylie Ferguson said.  “We feel confident positive outcomes will continue to come.”