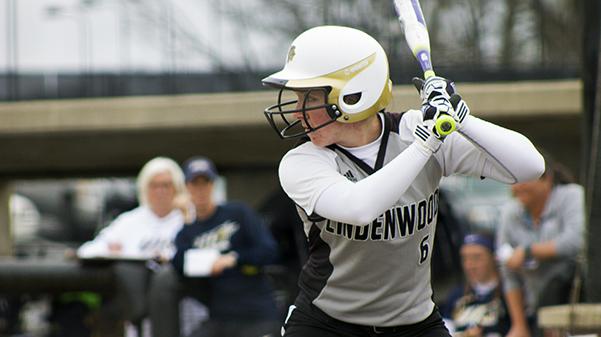 Lindenwood's Keri Sheehan squares up for the pitch during a game last season against the University of Illinois Springfield on March 28, 2017.
Photo by Kelly Logan

Ivy Reynolds from LUTV’s Lion Pride Sports speaks with Lindenwood softball coach Liz Kelly about her coaching experience at other schools before coming to Lindenwood.

This segment is the final part of a 10-part series of interviews with the head coaches of spring teams.
What to expect this season
Lindenwood University’s softball team will be starting its season this month coming off a 21-26 overall record in 2017. The team finished the season with a record of 9-17 in MIAA conference play.

According to the Lindenwood athletics website, the team was picked 11th overall in the MIAA preseason coaches poll.

The Lindenwood softball team will be showing some love with its first game on Valentine’s Day. The Lions will be playing a doubleheader against Quincy University. Last year, the Lions defeated Quincy in a March doubleheader 6-5 in game one and 11-7 in game two. This will also be Quincy’s first game of the season. The first game starts at noon with game two following at 2 p.m. at the Lou Brock Sports Complex in St. Charles.