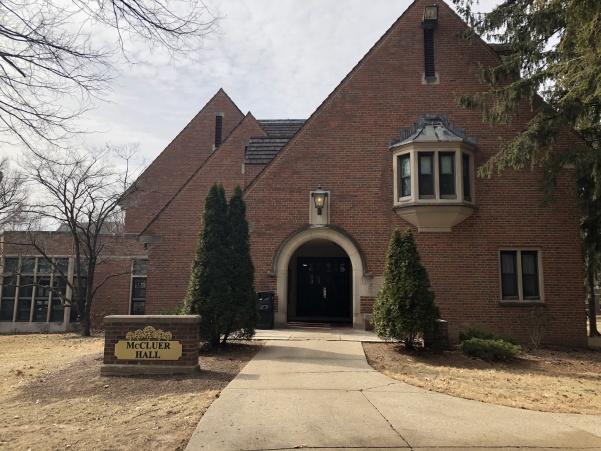 McCluer Hall, currently a female residence hall, will undergo renovations this summer to become an academic and faculty office building for the fall 2018 semester. Photo by Madeline Raineri,

Coed housing is not the only change coming to campus next fall, according to Shane Williamson, the associate vice president of Student Life and Diversity, and Terry Russell, the director of Residential Life. Here is a rundown of the changes:

Starting next fall, both Calvert Rogers Hall and Rauch Hall, which is currently a freshman female residence, will become coed housing. In both residences, the second and fourth floors will house male students. The current female residents of Calvert-Rogers who live on the second and fourth floors will be able to choose different residence hall assignments on March 19 before graduates and seniors are able to choose their housing, according to information provided by residential life.

Tri Sigma Sigma will be able to retain its current position on the first floor of Calvert Rogers with its chapter room.

Upperclassmen will have the first choice when it comes to living in the coed housing, says Russell, and then in succession with sophomores and freshman.

“Because it is a new thing, we think it will be exciting for the university, and it will go very fast and fill up quickly,” Russell said.

The weekend 24-hour visitation policy will continue and both Russell and Williamson are confident the students will respect the policies put in place, even with coed housing, and they will work off an honor system.

In the fall semester, Lindenwood will not be using the residences on Oak Street and the 1000 block of Powell Street. The current residents will be able to choose different housing assignments, whether it be a residence hall or a house, on March 19.

“We’re opening up some houses on Linden Terrace for men as well; right now its about 75 percent women 25 percent men, and we want to open it up to be about 33 percent men and 66 percent women,” Russell said. “We’re going to open up a few options if the men want to stay in a house.”

The requirements to live in non-traditional housing will change as well, and students will be required to have at least a 2.o GPA and at least a junior standing with 54 credits.

“Let’s say you have sophomore status right now, but you’re taking enough credits by the end of this semester, should you pass everything and have junior status, we will allow you to sign up for a house,” said Williamson about the registration process.

In addition, effective this fall, non-traditional housing will have a 24-hour, seven-day-a-week visitation policy.

The four dorms near Evans Commons; Flowers, Mathews, Reynolds and Pfremmer Halls; will become freshman-only residences. According to Terry Russell, Pfremmer and Reynolds will become female residences. All of the current residents in these halls will be able to choose new residences on March 19.

An honors wing will be available in both Pfremmer and Flowers for the respective students as well.

McCluer Hall will become an academic and faculty office building with renovations beginning this summer. The students currently housed in McCluer will be able to choose new residencies on March 19.

The members of Phi Sigma Sigma who currently occupy McCluer will be relocated to Irwin Hall, which will become an upper-classmen dorm, and they will also be given a chapter room for functions.