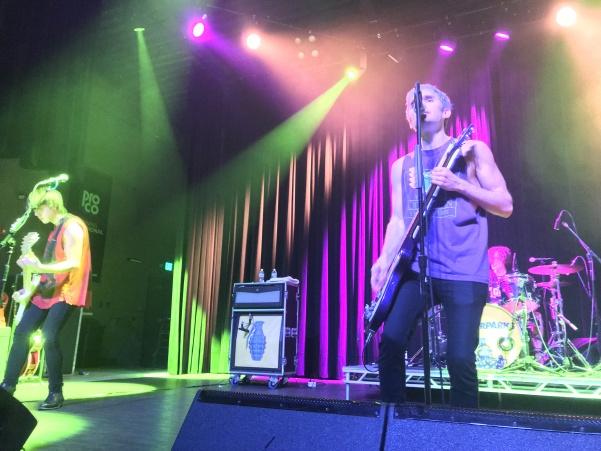 Waterparks performing at Delmar Hall in St. Louis on its "Made in America Tour" on Nov. 21, 2017.
Photo by Megan Courtney

After releasing an album that is raw and filled with so much emotion, Waterparks has proved that it is not the typical boy band with “Entertainment.”

Depression, love and anger are just a few of the emotions that can be heard on this album. Some of the songs are inspired by lead singer Awsten Knight’s now ex-girlfriend, Ciara Hanna, who is most known for her role as the yellow Power Ranger on Power Rangers Megaforce.

“Blonde” and “Lucky People” are two songs that were written about Hanna.

“Blonde” is about the stereotype that blondes have more fun mixed with Knight’s sadness. The song also talks about Waterparks’ journey as a band and how Hanna kept him grounded through it all.

“Lucky People” is about Knight and Hanna’s relationship, which was long-distance, as Knight lives in Texas and Hanna lives in California.

After the breakup is when certain songs on the album started to become more explicit, like “TANTRUM.”

“TANTRUM” is mostly about the double standards of the music industry and how it has affected Knight, but toward the end of the song is when it touches base on Hanna and Knight’s relationship.

Knight called out Hanna’s exes on the final verse of the track and even threatened violence if he “saw them in person,” as one of the lyrics said.

Despite there being many songs about Hanna on “Entertainment,” the album was well received across social media.

“This album really showcases Awsten’s vocal range from ‘Lucky People’ to ‘TANTRUM,’” said longtime Waterparks fan Samantha Kimball. “It’s also very raw because Awsten let the world see a side of him that most people wouldn’t be willing to share.”

“Entertainment” is notably different from “Double Dare,” the band’s first full-length album that was released in 2016. Although there were songs about Hanna on “Double Dare” as well, “Entertainment” showcases the emotional side of a breakup.

Knight let fans have a glimpse of the relationship as well as other relatable subjects with “Entertainment” from beginning to end and brought light to subjects that fans may be struggling to talk about, which is one of the many reasons why the album is so relatable.