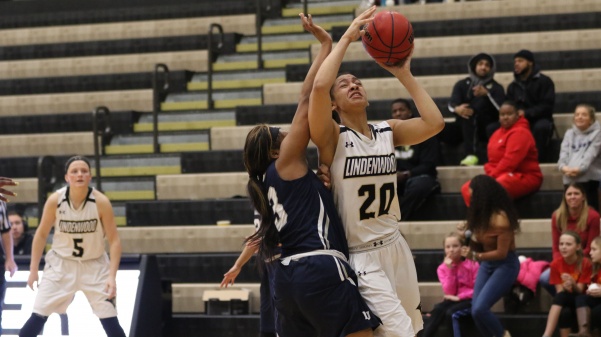 Forward Gabby Walker, No. 20, gets the bucket in Lions' 83-73 win over Lincoln University. Walker tallied nine points in the win.
Photo by Kyle Rhine

In the first half, Lindenwood made only seven shots while shooting just 30 percent from the field. The Lions trailed by three at halftime, but rallied in the second half to capture its 13th win of the season.

Lindenwood dominated the glass, outrebounding the Tigers 41-30 with 15 being offensive rebounds, which led to 27 second chance points.

The bench recorded 43 of the Lions’ 83 points as junior guard Sara Ross tallied seven points and dished out four assists.

Sophomore forward Kallie Bildner captured her 13th double-double of the season, scoring 19 points and grabbing 17 rebounds. Bildner is averaging 18.9 points per game and 12.1 rebounds per game.

“Things were a little rough at the beginning, but once we got going, good things started happening,” Bildner said. “Having not played for a week, we had to get the rustiness off and get back to doing us.”

Following Saturday’s win, the Lions are winners of three straight and will have a rematch against conference opponent Lincoln University Tuesday, Feb. 13 at 5:30 p.m. in Jefferson City.