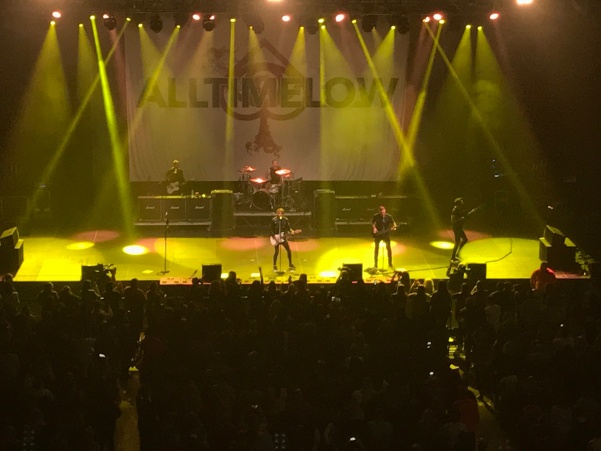 All Time Low at the Y98 Mistletoe Show at the Family Arena in St. Charles, MO on Dec. 2, 2017.
Photo by Megan Courtney

Being squished against the barricade in a room packed with a thousand or more people can actually boost your mood.

A study done by Melissa K. Weinberg and Dawn Joseph in Australia sampled 1,000 random people to determine if there was any connection between “habitual music engagement and subjective well-being.”

According to the study, “the findings revealed that engaging with music by dancing or attending musical events was associated with higher subjective well-being than for those who did not engage with music in these forms.”

I am an avid concertgoer myself, sometimes going to two or more per month. Out of everything that I love doing, I find that attending a concert brings out my inner happiness the most because I’m able to let go of everything for a little while. It’s like nothing else matters because I’m just focusing on my favorite artist and the music that they are playing.

Having gone to a lot of concerts, you can imagine how many people I’ve met. Concerts are where I have met some of my best friends, whether it be while we are waiting in line for doors to open, standing at the merchandise table or squashed against the barricade singing our hearts out to the song that’s playing.

[perfectpullquote align=”left” cite=”” link=”” color=”” class=”” size=””]Music brings people together, and that can make you happy as well.[/perfectpullquote]

Music brings people together, and that can make you happy as well.

According to the Australian study, “the findings also emphasized the important role of engaging with music in the company of others with regard to subjective well-being, highlighting an interpersonal feature of music.”

I have always preached to my friends, family and to groups for certain bands that I am in on Facebook, that attending a concert is great for so many things other than getting to see your favorite artist live. There are many health benefits that come with attending a show.

Burning calories happens to be one of those benefits.

According to Livestrong, dancing for one hour at a show that is high-energy can burn approximately 400 calories. The number of calories burned depends on how much dancing and jumping around is done.

Attending your favorite artists’ live show is not only improving your health, but your overall happiness.