Freshman stars in lead role of “The Cripple of Inishmaan,” opening Tuesday 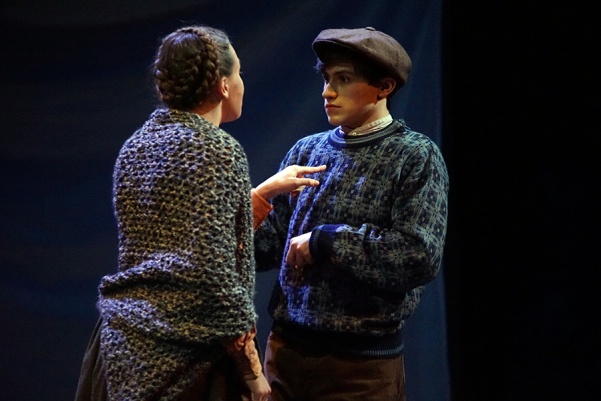 Junior Calyn Roth (left) and freshman Caleb Ellis in "The Cripple of Inishmaan." Ellis plays "Cripple" Billy Claven, the title character, who longs to leave his mundane life to go be a movie star.
Photo by Mitchell Kraus

A live violinist plays traditional Irish music in the background as the audience sits just a few feet away from the jagged cliffs of Inishmaan, Ireland.

“We picked the Black Box … because of the intimacy,” said director Emily Jones. “All of these characters are so open and honest in their daily lives … it [the theater] makes it even more spectacular.”

Written by Oscar-nominated playwright Martin McDonagh, the tale of “The Cripple of Inishmaan” is a dark comedic story of “Cripple” Billy Claven and his fellow residents on the island of Inishmaan.

Raised by his two aunts, Cripple Billy was orphaned at a young age and spends most of his days staring at cows and reading. He deals with intentional and unintentional torment on a daily basis from those around him because of his disabilities.

“Billy is human just like anybody else is,” said freshman actor Caleb Ellis, who plays Cripple Billy. “His desire and his drive to be seen and treated like anyone else … rings true with myself and all of us on a certain level.”

“Though he’s different and has his own struggles, his own trials that he has to go through, it doesn’t make him any different from anyone else,” said Ellis.

Toward the beginning of the show, town gossip Johnnypateenmike (played by Tim Lewarne) tells Billy and his aunts that an American movie is being filmed in a nearby town. Billy, along with siblings Helen and Bartley McCormick, longs to be in the film.

Both siblings serve as a source of harassment in Billy’s life, but only Helen means it in a harmful way.

“Look past the bitchy outer shell,” Kelch said about her character. “Even though she puts on this front, it is just a front. … She really [just] wants to be loved, like everyone else.”

Jones says that the audience should be prepared for the “brutality” of the characters.

Because of the small size of the cast, Jones was able to focus more on the tiny details of the show, even down to the small nuances of the actors’ line delivery. Jones brought in Professor Donna Northcott and student Nicole Weiss as dialect coaches to aide the actors in their Irish accents.

“Being in such a small-cast show … it’s an awesome feeling, being able to work with this small group of incredible people and just being like a big part of that,” Ellis said.

“I love small-cast shows,” Kelch said. “You get so much closer with each other. We get really specific with what we’re doing … so like every single detail, there’s been thought put into that.”

Jones hopes that audience members take away a message against bullying in our current world.

“I’m hoping that they [the audience] may also take away a little more of an open heart and acceptance and love for people who might be different,” she said.

“The Cripple of Inishmaan” runs from Feb. 13 to 16 at 7:30 p.m. and Feb. 17 at 2 p.m. in The Emerson Black Box Theater. Tickets are still available for all performances, except Friday night at 7:30 p.m., but they are going quickly. Students can get two tickets for free with their Lindenwood IDs. For ticket information, contact the Lindenwood box office at 636-949-4433.