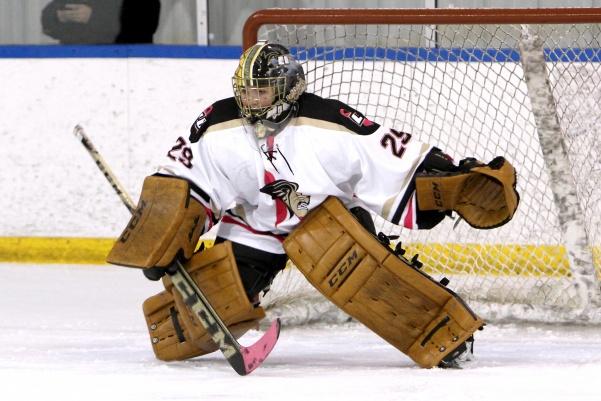 Goalie Nicole Hensley during her time playing for Lindenwood. Hensley recorded 13 saves in her Winter Olympics debut on Tuesday in Gangneung, South Korea.

Kacey Bellamy opened the scoring for the Team USA in the first period. In the second period, Jordan Lamoreux-Davidson scored twice in the space of six seconds to extend Team USA’s lead to 3-0. Gisele Marvin and Hannah Brandt rounded out the scoring in the third period.

The win means Team USA has now qualified for the semi-finals. They will face Canada in their last group game before the semi-finals on Thursday at 1:40 a.m. CST. The Canadians have defeated Olympic Athletes from Russia 5-0 and Finland 4-1 in their two games.

Hensley was caught up in pre-match controversy as the International Olympic Committee and Team USA engaged in debate about whether she would be allowed to wear a mask with the Statue of Liberty painted on it. A USA Today article reported that the International Olympic Committee deemed the artwork on the mask to be a potential breach of its rules against political symbols.

On the Team USA hockey helmet 'story' – there seems to have been a misunderstanding, we have not asked for the symbol to be removed

“We’re all good,” Hensley told the Washington Post. “I’m really not sure what happened. I’m just focused on playing the games. Our equipment guys take care of the equipment, and we take care of what’s going on on the ice.”

Hensley is the NCAA Division I all-time save leader with 4,094 saves. The goaltender played at Lindenwood from 2012-2016 earning a .921 save percentage during that time.