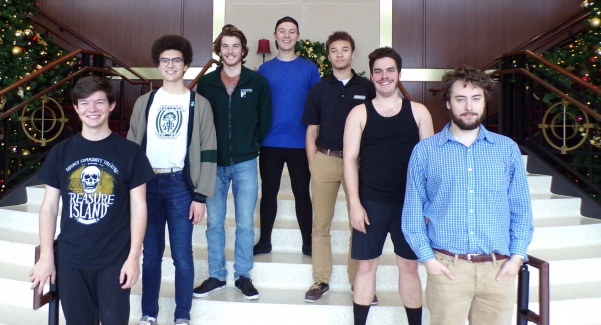 The all-male theater class stands in the J. Scheidegger Center, which will be their second home for the next four years. From left: Camden Scifres, Matthew Hansen, Michael O'Hara, Cody Ramsey, Valiante Waltz, Ian Fleming and Yianni Perahoritis.
Photo by Arin Froidl

For the first time in Lindenwood’s history, the freshman musical theater class is all male.

Traditionally a female-heavy school, the theatre department is always looking for more male talent, but this class’s makeup appears to be random.

Emily Jones, the program chair of the department, said Lindenwood gave offers to 20 actors, both male and female, who auditioned to be a part of the major; seven males accepted.

Jones said the young men “all bring something different to the table … different energy about them, different types, different strengths,” which is why they stood above the rest when it came to their auditions.

The men are equally excited for the class to be all-male.

“There’s not a lot of guys in theater in general,” freshman Ian Fleming said. “Having [all] guys is cool; it opens up a lot of opportunities for really neat shows.”

Fleming, originally from Kansas City, has been involved in shows since before he was born.

“My mom was pregnant with me during a show. … I was technically onstage when I was in the womb.” Fleming said.

Freshman Michael O’Hara, from Philadelphia, said the men are bringing “more testosterone, which the theater needs.”

O’Hara said he fell in love with theater because of John Travolta in “Grease.”

All of them have been cast in shows for the 2017-18 season and are working hard to prove they belong in this department.

“Theater is a hard business in general — male or female. It’s all about the chops,” freshman Yianni Perahoritis, from Kansas City, said. “There is more competition, but that also makes you work harder. It makes you push yourself to be better.”

Freshman Valiante Waltz, from Kansas City, said patience is the hardest part of the major.

“In auditions you have to wait through everyone and then you come in for your five minutes to make an impression,” he said. “Then in rehearsals you’re called for four hours, but you’re only really going to be working for 35-40 minutes of it.”

Theater professor Donna Northcott said she has been very impressed by the dedication of the class.

“They’ve all been great just in working and collaborating and working well off each other,” she said.

Northcott directed “A Christmas Carol,” which ran Dec. 7-9, 2017, in the J. Scheidegger Center, so she worked closely with several of the guys in their first college show.

“It’s always exciting to bring new people into the mix,” she said. “[It] keeps it fresh for everyone.”

Between rehearsals, the men dedicate a lot of hours to their classes, and they’ve developed a good dynamic, connecting well.

“We’re all a bunch of nuts,” Waltz said, laughing.

The group has a lot of inside jokes, one being barking at each other when they see each other on campus or when they’re hanging out.

“When you bark at someone, you’re claiming dominance,” Fleming said with Waltz laughing in the background.

Waltz said, “We love improvisation,” so they often do strange things and build off what each other is doing.

“We act like crabs sometimes,” said Fleming as he and Waltz demonstrated their crab impersonations.

Fleming said he especially likes the fact the class is all men because “you’re free to do whatever” when the men spend time together. “It’s all on the table when it’s just you guys,” he said.

While the men each have different visions for after graduation, they know theater is a part of their plan.

“My home is on the stage,” Waltz said. “If I can get a job in the theater industry, I’ll be happy.”

The freshman actors recognize the variety Jones and her team recruited and express excitement for the future.

“All of the guys in the group are talented and different in our own way,” Perahoritis said. “It’s kind of cool, honestly.”

This is probably the last time the Lindenwood theater department will see a musical theater class of all men.

“I think it’s a fluke,” Jones said. “If not, we’ll be doing some really great all-male musicals soon.”