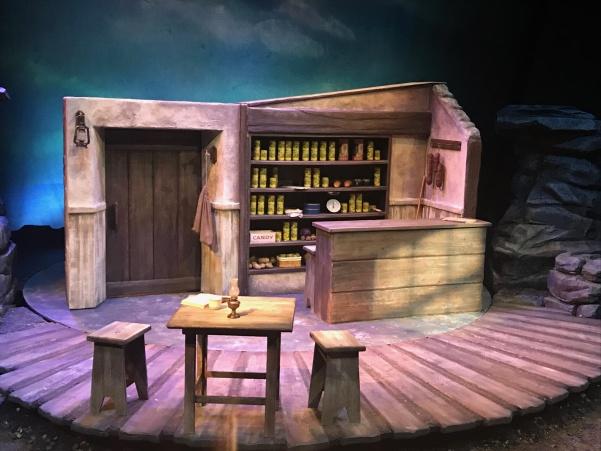 "The Cripple of Inishmaan" set is on a turntable, which is something that was built for another production called "Next to Normal." William Spaeth, set builder and acting major, said that building a set can take anywhere from four to five weeks.
Photo by Megan Courtney

Designing and building a set for production can take anywhere from four to five weeks according to acting major and set builder William Spaeth.

Spaeth said the designer will read the script for the show and from there will talk to the director about what they want to happen.

“The process is called drafting,” Spaeth said. “They’ll sketch out a general idea of what the show is going to look like.”

After the drafting is complete, the designer will go into the specifics on what needs to be built for the show.

Spaeth said that the set for The Cripple of Inishmaan took them approximately four weeks to put together.

“It looks a lot more complicated than it is, generally speaking,” Spaeth said.

Spaeth said the set of The Cripple of Inishmaan was on a turntable, which is a revolving stage used to speed-up the process of switching from scene to scene.

“The turntable was something that we had built a year and a half ago for ‘Next to Normal,’” Spaeth said.

Spaeth said the time it takes to build a set depends on the show, how complicated the set and how much time they are given to build the set.

The number of people that build the sets has changed over the years, according to Spaeth. He said there are six students right now.

During his freshman year, Spaeth enrolled in in the student employee program and applied for a job in the Scheidegger Center.

“I got a job in the scene shop, which was great,” Spaeth said. “I had never worked with hammers or wood before, or anything like that. I’d never done any construction work.”

Spaeth has been working in the scene shop ever since and is graduating in May of this year.