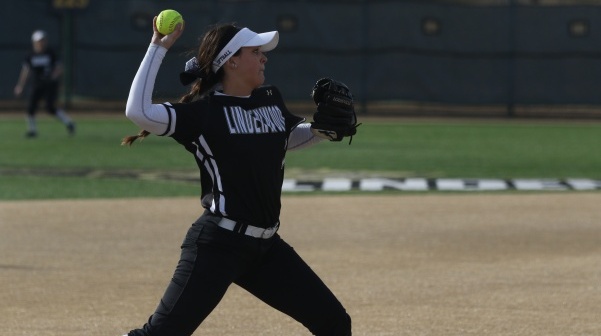 Lindenwood's Caitlyn Touchette makes an out at third base during the second game of a doubleheader against Quincy University.
Photo by Michelle Sproat.

The Lindenwood softball team split its season-opening doubleheader with a 9-7 win and 10-2 loss against Quincy University. Both games were held on Wednesday, Feb, 14, at the Lou Brock Sports Complex.

Quincy was able to start the first game off with three runs in the top of the first inning, holding the Lions to nothing until the bottom of the second. There, the Lions scored five runs. The third inning brought one run for Quincy and two for Lindenwood. In the fourth, Lindenwood scored another two. The visiting team scored three in the top of the fifth, but the rest of the game remained scoreless for both teams.

In the second game of the day, Quincy started again with three runs in the first inning. They were able to maintain that momentum as they scored one in the fourth, two in the fifth, one in the sixth and three in the seventh. Lindenwood only scored two runs in the second inning, and Quincy kept them at that score.

Following these games, both teams are at a record of 1-1 on the season.

Lindenwood will take on Davenport University and Kentucky Wesleyan College on Saturday, Feb. 17, at the Lou Brock Sports Complex. The first pitch against Davenport is scheduled for 10 a.m.