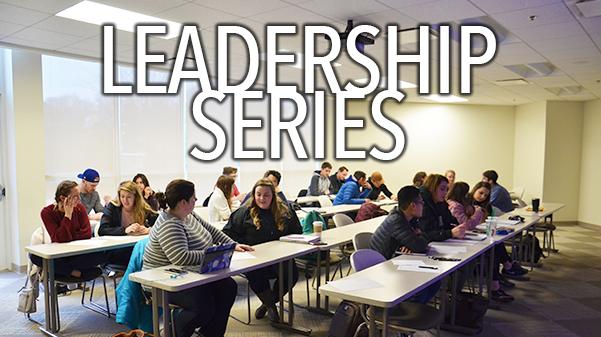 The Fall 2018 Leadership series occurs every Tuesday in Evans Commons 3020 at 4 p.m.
Graphic by Andria Graeler
Photo by Rolando Dupuy

MATT HAMPTON | Reporter
John Barr, an assistant professor of physics, energetically talked about how positive expectations of yourself and others can lead to positive outcomes as part of the Spring Leadership Series on Tuesday.

“Managing Expectations in Leadership Positions” was held at 4 p.m. in Harmon 131. Barr gave many examples:

The primary task of a leader is to get the best out of the people they’re leading to accomplish a goal.  “If they’re terrible, you’ll get substandard results, but if they’re a little better, their work will be kind of good,” Barr said.
Expectations limit our achievements.  “Usually we don’t achieve beyond our dreams,” Barr said.  However, most people have low expectations, so the job of a leader is to raise expectations, he said.
Set goals, don’t create excuses.  “An excuse is the most powerful thing a human can have,” Barr said. “Because it’s like Thor’s hammer, nobody can lift it.” Barr said people will always laugh at new ideas, but they should say, “Good luck with that,” instead of “That’s never going to happen.”
The job of a leader is to create necessity for their followers because people are more “hard working, dilligent, and inventive” when motivated by necessity.
The only people who never fail are those who don’t try.  Sometimes the pursuit can be more important than the goal, he said.
Children have their expectations set by their parents and others, but adults have to set their own expectations.  Because of this, Barr said to practice positive visualization of success.  He encouraged the audience to write a list of ten things to accomplish in their lifetime.  Most people will write goals they will accomplish within one year, so he encouraged students to aim higher.

Barr spoke to a mostly full room, and his presentation elicited laughter and discussion from the audience.  At the end,  he picked up a banjo he brought but did not play it to demonstrate the creation of expectations.

The next installment of the leadership series, “Leadership and Management:  Delegating Effectively,” will be lead by student involvement coordinator Rachel Tolliver on Mar. 6.

This is the fifth story in a series covering the leadership sessions offered on campus. Check back each week for updates.