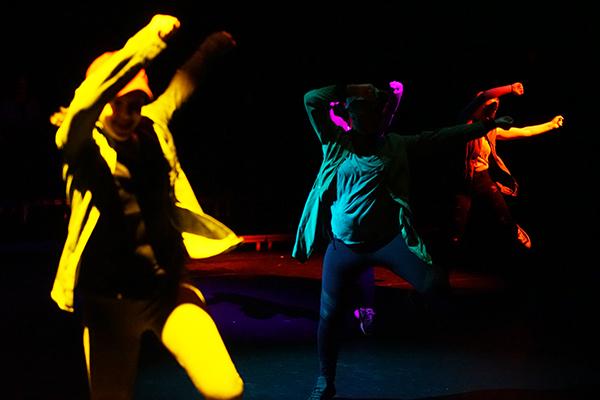 Students perform on Wednesday, Feb. 21 as part of the 2018 Winter Dance Concert in the Emerson Blackbox Theater.
Photo by Mitchell Kraus

This year’s winter dance concert places students not only on the stage, but also in the choreographer’s chair.

All nine of the dances are choreographed by students in the dance program with no overarching theme, meaning that the performances range from lively and bright all the way down to dark and dreary.

Junior Brittani McClellan, who choreographed one of the dances, said that this is her first time choreographing a show. The sequence she designed is about a person facing internal struggles.

“[Choreographing] is certainly more of a process [compared to dancing],” McClellan said. “Plus this is for a grade.”

Sophomore Sydney Gibbs said this is the second time she has choreographed.

“My previous show was very informal,” Gibbs said. “It was just in one of the studio rooms, so I didn’t have to worry about lighting, costumes or a big audience.”

The performers in Gibbs’ dance wear lace blindfolds as a symbol of single-mindedness.

“I based my sequence on the Divergent book series,” Gibbs said. “At one point one of their members takes off their blindfold and tries to leave the group.”

One of the challenges facing the students was the four-sided stage set up in the Emerson Blackbox Theater.

Another challenge was the awkwardness felt when telling fellow students what to do.

“It was really intimidating to instruct my peers,” McClellan said. “It just felt weird.”

The student choreographers for the winter show are not typically seniors, because the senior students put on the spring show, according to Amy Gammon, the winter show’s director and an adjunct professor. Gammon is currently in her 3rd semester teaching at Lindenwood after graduating from the program herself.