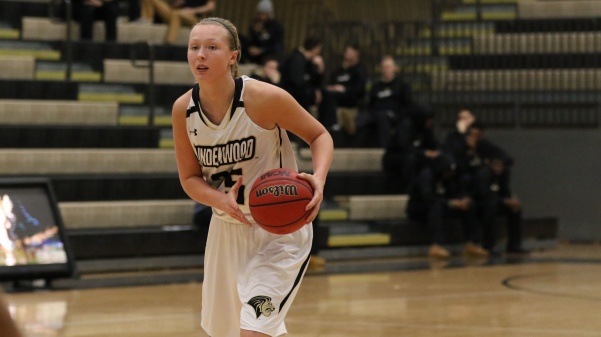 Forward Kallie Bildner, No. 25, looks to pass the ball to a teammate in Lions' loss against Central Missouri back on Feb. 17.
Photo by Kyle Rhine

Lindenwood took advantage of the Bearcats’ shooting struggles in the first half as the Lions had a 44-14 lead at halftime. The Lions shot 54.8 percent from the field while Northwest Missouri shot 19.2 percent.

“We came out in the first half and never looked back,” sophomore forward Kallie Bildner said.

The Lions shot the ball well the entire game, shooting 52.5 percent from the field including 47.4 percent from 3-point range.

Lindenwood out-rebounded the Bearcats 43-26 and dominated the paint, scoring 44 points to the Bearcats’ 20.

Lindenwood’s bench counted for 54 of the 84 points scored against the Bearcats. Forward Lexie Moe tallied 15 points on 6-10 shooting in 24 minutes, while forward Gabby Walker led the team with 18 points on 8-12 shooting in just 18 minutes.

Forward Kallie Bildner notched her 15th double-double of the season as Bilder scored 14 points and grabbed 10 rebounds in the win.

“We played great team ball, always finding the open man, and shot the ball very well as well,” Bildner said. “Now’s the time of year where these kinds of games have to happen every game or else your season will be over.”

Following the win, Lindenwood swept the season series against Northwest Missouri and will play its final regular season game Saturday against conference opponent Missouri Western at 1:30 p.m. at Hyland Arena.